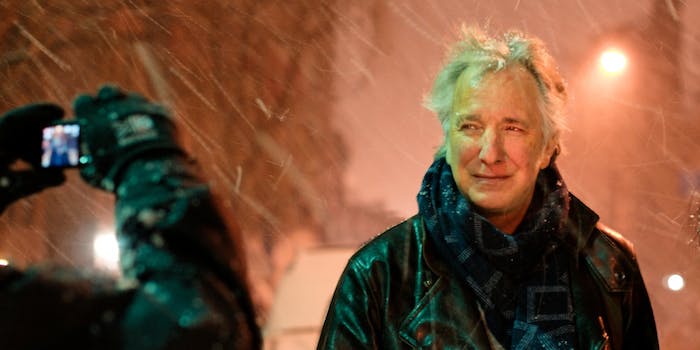 If you weren't already emotional, this might do it.

The story of how J.K. Rowling got Alan Rickman to play Severus Snape, now one of his most iconic characters, is well-known among Harry Potter fans, but we never knew what exactly Rowling said to get him to do it—until now.

Fans had speculated for years that Rickman had known something about Snape that no one else did, well before the publication of Deathly Hallows. Harry Potter producer David Heyman once said that Rickman would sometimes object to what a director wanted him to do in a scene because he knew what would happen. Rickman revealed in 2011 that he spoke to Rowling before filming started to understand the role and that she told him a key piece of information—although he still had to purchase the books like everyone else.

He later clarified that Rowling didn’t tell him that Snape wasn’t a true villain, though he still remained mum on the piece of information itself.

In a letter published in Empire Magazine reflecting on the end of the Harry Potter films, Rickman noted that it was that piece of information that convinced him that “there was more to Snape than an unchanging costume.”

Many people continue to mourn Rickman’s death after a battle with cancer. One of them asked Rowling what she told him about Snape all those years ago.

@jk_rowling Will you tell us the piece of information that you told Alan Rickman about Severus Snape? Or will that forever be a secret? :-)

Rowling soon responded, and as Rickman said, it had nothing to do with whether he was good or evil. It was something much more vital to his character.

I told Alan what lies behind the word 'always'. https://t.co/NHTJ5J6kxb

The quote comes from the end of Deathly Hallows in a scene that reveals Snape’s ultimate allegiance as well as the one thing motivating him throughout the entire series. After seeing his Patronus—a silver doe—we learn that everything he did for Harry and Dumbledore was the result of his love for Harry’s mother Lily, despite how much Snape unloaded his hatred and bitterness for Harry’s father on Harry himself.

If you suddenly have even more uncontrollable feelings about “Always,” know that you’re not alone.

@AshleyKSmalls I know exactly how you feel.