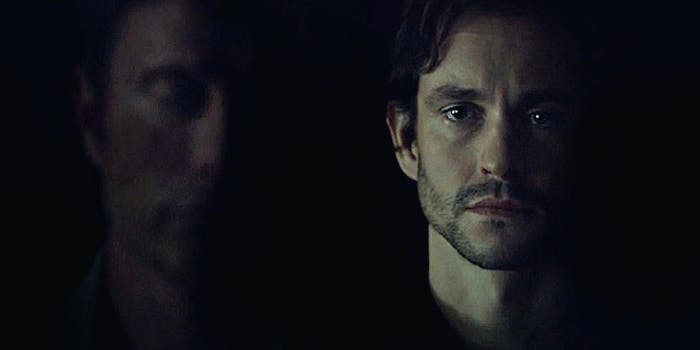 ‘Hannibal’ is subverting everything we know about male relationships

Bryan Fuller's serial killer fever dream has evolved a male friendship unlike anything else on television.

“Is Hannibal in love with me?”

This question, haltingly voiced by Will Graham, occurs in the opening scene of Saturday’s Hannibal, the last episode before this week’s series finale.

The question and its response, “Yes, but do you ache for him as well?” has opened the floodgates on fan speculation that the show will be going there after all this time.

But where is “there”? After three seasons, why is there still so much debate surrounding what kind of relationship Hannibal and Will really have? 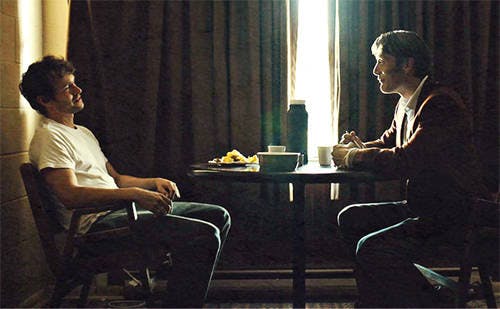 Hannibal has continually pushed boundaries during its prematurely extinguished three-season run; but one of its most interesting subversions is one we may not have the language to talk about. That subversion is Hannigram—the fandom ship name referring to the deeply passionate but so far non-sexual relationship between Hannibal and FBI profiler Will Graham.

Prior to season 3, creator Bryan Fuller spoke often about the show’s overt homoerotic subtext. “It’s practically text in a couple of episodes,” he noted in a 2014 interview with the Backlot on the subject, “just because we really want to explore the intimacy of these two men in an unexpected way without sexualizing them… it is not sexual, but it’s beyond sexual. It is pure intimacy in a non-physical way.”

In other interviews prior to and during season 2, he described the cat-and-mouse game Will and Hannibal were playing as “a seduction,” and stated, “at its heart, I think Hannibal Lecter and Will Graham are having a heterosexual romance.”

Some fans who picked up on this thread accused the show of queerbaiting instead of deepening its subtext, leading to careful analytical breakdowns of the difference between the two. In a narrative that queerbaits, queer sexual overtones are constantly teased at, explicitly, in canon, only to be negated again and again with a subtle refrain of “no homo.” The impact is to simultaneously court queer fans while placating heteronormative ones—exploiting what’s between the lines instead of deepening it.

The universe of Hannibal, on the other hand, is almost explicitly non-heteronormative. All of the heterosexual relationships on the show have been “unsuccessful” in one way or another. The show’s only arguably genuine straight relationship is a childless one in which one partner is dying. Other straight sexual relationships are one-sided, coercive, entered into for strategic means, non-consensual, incestuous, doomed to failure, or deeply dysfunctional. On the other hand, the show’s only queer relationship thus far is also its most overtly successful one: A happy lesbian couple raising a family.

Against this background, season 3 has openly pushed and explored the level of connection between Hannibal and Will.

@hoziered I'M THINKING OF THE 10 EPISODES WE HAVE LEFT AND WHAT'S YET TO BE SEEN. #HANNIGRAM IS A THING AND IT'S COMING FOR THE #FANNIBALS!

The deep intimacy between Hannibal and Will has been developing so steadily that by now every character on the show has textually acknowledged it as a reality. Hannibal’s psychiatrist Bedelia has been its most overt champion, explicating again and again to both of them that what they feel for each other is “love,” that they have a “passionate” relationship, that Will is Hannibal’s “bride,” that Hannibal is Will’s “old flame,” and that Will doesn’t seem to fully understand how deeply “intimate” his relationship with Hannibal is. These consistent reminders have lasted through seasons 2 and 3, culminating in Saturday’s episode, which saw Will finally uttering the words that put the relationship on the show’s front burner:

[Placeholder for http://color-division.tumblr.com/post/127225626869/it-took-him-3-seasons-to-understand-enough-and embed]
(Sorry, this embed was not found.)

Hannibal himself has already voiced his feelings for Will as “love” numerous times, though this love is a jealous, twisted, possessive, and obsessive quality that has cost Will everything good in his life (and nearly cost him his brain at one point). If Hannigram became overtly sexualized rather than just strongly hinted at, it would turn the cannibal Hannibal Lecter, one of the best-known villains in pop culture history, into a gay villain.

Such a twist could arguably be read as part of a longstanding homophobic trope that associates queer sexuality with evil or criminal behavior. So given how damaging and dangerous the relationship could be within the show’s storyline, and its potential reception as homophobic outside of it, why are fans so excited?

The obvious reason, of course, is that as the show’s primary relationship, the plot revolves around their deep and thus far unrealized longing for one another. It’s hard for the show’s fans not to want to see that resolved, even if it ends badly (or with someone getting eaten).

A less obvious, but still crucial reason, is that queer representation within Hollywood is still extremely low. In 2014, GLAAD found that only 17.5 percent of major studio films contained inclusive representation of queer or genderqueer characters. For television, that number was drastically lower: Only 4 percent of all series regulars on prime time TV in 2014 were GLBTQ.

Within this context, shows like Hannibal are easily politicized. The pressure upon such shows to move from subtext to definitive queer representation is extremely high, because they’re already open to progressive readings—even if what “queer representation” might look like in the specific context is flawed. Perhaps even more significantly, that sociopolitical pressure transfers to interpretations of the subtext itself. Fans who have historically been underrepresented or negatively represented in media will inevitably seek to find echoes of themselves in the media they consume, especially if that media is already inclusive, like Hannibal.

Because of this dismal combination of vast underrepresentation and subsequent frustration and pressure from fans who embrace subtext-heavy narratives, it becomes difficult to read dynamics like Hannigram without falling into rigid binary interpretations: Either the characters lock lips onscreen, becoming sexualized in a way that unequivocally leaves no room for interpretation, or that relationship is considered a platonic relationship between straight people whose homoerotic interest is “subtextual.” In a world where heteronormativity and by extension straight relationships are the “default” in media, subtext will ultimately only cater to the erasure of queer characters—right up until it doesn’t anymore.

This rigidity has contributed to a certain amount of frustration for fans. In the buildup to the finale, fans have been concerned about queerbaiting while worrying that the relationship might be construed as unhealthy. Last year, in a discussion of whether Hannigram was a queer ship, redditor gnarlwall noted that the trend of slash fandom—shipping queer relationships involving men—was overshadowing the context of the show itself.

“Shipping, especially slash pairing, has become de rigueur. People have been reading homoerotic subtext into stuff for so long now that when something is intentionally provocative they might miss that the intimacy is not meant to be sexual.”

Is there room for a new interpretation of relationships like Hannigram? More importantly, can we read nuanced narratives like Hannibal without injecting heteronormative standards into them that would seem to require us to essentially pick a side?

If we accept the possibility of more nuanced queer readings of Hannibal, then we can also allow room for other readings, like asexuality, demisexuality, or other forms of love, whether romantic, platonic, sexual, or something in between.

Many fans seem to have no trouble seeing a way forward for this particular relationship despite the lack of sexual interest they’ve expressed in each other. “Hannigram can irrefutably be regarded as a queer relationship,” a fan named Jasmine told the Daily Dot. Jasmine, who shares GIF commentary for the show on her Tumblr, daughtersofthanos, pointed out that queer identity isn’t tied to overt displays of sexuality.

Sexual interactions do not dictate whether two people are involved. The nature of the show is founded on the intricacies of bonds, whether they be sexual, romantic, or otherwise. Hannibal’s urges and obsessions toward Will obviously illustrate profound desire, and many viewers label it a bloodlust or passion for violence.

Both of these descriptors reference some sort of yearning, craving even, and as Hannibal and Will are both male, it would constitute a queer relationship since many of their actions show they are acting based on these feelings. Bedelia and Will’s conversation in the most recent episode is basis enough to establish Hannigram as canonical, even. It was not “fanservice,” but an accurate exploration and explanation of the most profound and significant pairing on the show.

Tumblr user genufa, who devotes much of her blog to commentaries on the show, went a step further, reminding us that straight relationships like the central romance in The Remains of the Day are allowed to be unsexualized while still being read as textual. “A fictional romance never has to be overtly sexual in order to be textual,” she told us by email.

No one would deny that The Remains of the Day is a requited romance in that the main characters have feelings for each other, even though they are unfulfilled, barely voiced, and never physical; and that this romance is the emotional core of the story. You are meant to read between the lines of the script and into the actors’ fine performances.

The same is true of Hannibal. In fact, the ambiguity in their relationship is as much textual characterization as it may be the writers playing coy: above all, it is a deeply weird relationship. Both Hannibal and Will have long histories of emotional isolation, barely apprehend their own complex feelings for the other, and are engaged in a zero-sum power play.

She adds that just as it’s taken Will three seasons to articulate what he thinks Hannibal feels for him, it’s taken the show three seasons to evolve their relationship to the point where the debate about sexuality can take place. “I would argue that for much of the first two seasons, it wouldn’t even have been possible to write one of these characters making a sexual overture to the other without informed consent and abuse of institutional power becoming issues; and that’s setting aside the fact that they’re often physically separated!”

But if the show has taken its sweet time getting here, then Saturday night, when the series finale arrives, all bets are off.

And along with wondering who will make it out alive, fans will almost certainly be waiting for the solution to the mystery of a love affair: a solution that could potentially pave the way for more meaningful representations of love in the media—even the kind that bites.