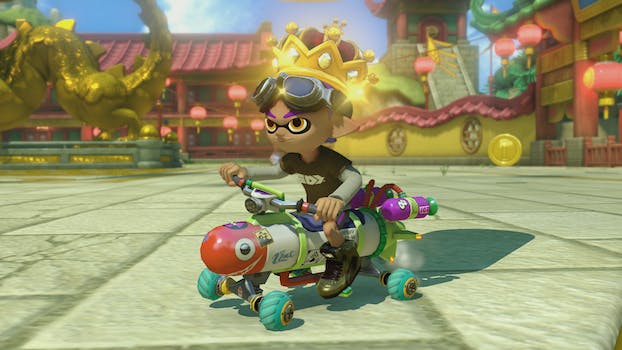 Even better than you remember.

Nintendo is bringing one of the Wii U’s biggest titles, Mario Kart 8, to the Switch with a bevy of new features. We recently had a chance to go hands-on with some races and each of  the game’s five new battle modes in a private multiplayer session at PAX East.

From the moment you first fire up Mario Kart 8 Deluxe on Nintendo Switch, you will have all of the tracks and characters unlocked to play with. This includes new additions like the Inklings and Dry Bowser. However, you will need to earn coins in the various single and multiplayer modes to further customize your cars and bikes.

As far as the standard offerings, Deluxe doesn’t differ much from Mario Kart 8. All the DLC characters and cups are included, as well as the additional challenge of 200CC mode and a new “no-fall” setting for younger players. However, the big new draw is Battle Mode, which fans sorely missed on Wii U.

Fan-favorite Balloon Battle is back, but with a twist. The competitive edge has been narrowed down, as losing each of your balloons won’t remove you from the game, but instead take a sizeable chunk of your amassed coins. Combined with keeping your balloons intact, this ultimately determines the winner of each match, and players will be able keep their total at the end of their session. Another mode, Bob-Omb Blast is a spin on Balloon Battle, but the only items players will be able to use are, predictably, bombs. This is just as hectic as you might expect, but doesn’t seem like it will maintain popularity online and it feels a little cheap as a completely separate offering.

One of the best new additions is Renegade Roundup, a cops-and-robbers-style brawl that randomly decides teams of criminals on the run and Piranha Plant carrying law enforcers. The police team simply needs to ram into a fleeing renegade to send them to jail. Once imprisoned, the player will sit in a cage unless one of their teammates drives over a button located just underneath to free all captured teammates. Although the cops won in both of the sessions we tried, the matches were tense and engaging.

Overall, Mario Kart 8 Deluxe seems like a great choice for new Switch owners once they finish Breath of the Wild. Though, Battle Mode might not be enough to entice players who owned the Wii U version to double dip, there are a few new items, like the first appearance of jumping feathers since Super Mario Kart.

Four players can use one Switch console at a time, with room for up to 12 racers total utilizing the system’s LAN capabilities. The JoyCon, Grips, and Pro Controllers can be used as well as new compatible wheel controllers that launch with the game, at the price of $14.99 per pair.