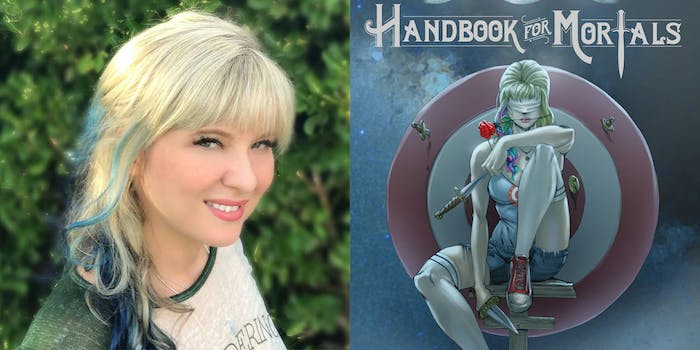 You can buy your way to the NYT Best Seller list, but the internet will notice.

Getting readers interested in a debut novel is hard. Getting to the top of the New York Times bestseller list? Surprisingly easy, if you know how to game the system.

On Thursday, the Young Adult (YA) book Twitter community noticed something was off when Handbook For Mortals, a new YA novel that few people had heard of, knocked Angie Thomas’ The Hate U Give off the No. 1 spot of the Times‘ YA bestseller list. Handbook For Mortals was published by GeekNation, a website that just recently decided to jump into book publishing. The author, Lani Sarem, is an actress and former band manager.

At this point, writer Kayleigh Donaldson also began investigating the saga, which she chronicled on Pajiba. She noted that the author of the book was already set to star as the lead character in the movie adaptation. That’s….not normal.

So how did the book make it to the top of the list? Buying in bulk, it seems.

Stamper exchanged DMs with bookstore employees, who told him they received calls about ordering the book in bulk for “events.”

Jeremy West, another writer, also did some sleuthing. He called for more sources to come forward anonymously. It turns out the author worked as a band manager before she decided to write YA books. One of the bands she managed? Blues Traveler. Yep.

The band tweeted about the author on its official Twitter account: “yes, this is weird but not surprising…We fired her for these kind of stunts. Her sense of denial is staggering!”

The band has since removed the tweet. But that isn’t this story’s only celebrity twist. JC Chasez, the author’s cousin (!), promoted the book when it was released last week.

Sarem thanked Chasez and tweeted a brief description of the book, which doesn’t sound like an appropriate plot for a YA book.

In the end, the investigation into the book’s mysterious bestseller status paid off. The NYT quickly got involved and updated the list.

Angie Thomas was thrilled to be back in the #1 spot.

Stamper summed up the whole drama-filled incident in this tweet:

Sarem has not publicly commented on the scandal as of Thursday evening. But West got some dirt from a new source.

It seems the author was aware of the shady methods to launch her book to the top of the list.

Also, she always planned to star in the movie.

So, the whole plan was to buy the books in bulk to promote a film. Luckily, the YA Twitter community worked together to shut the whole thing down.

Meanwhile, the rest of the internet went wild for the story.

Author and illustrator Whitney Gardner drew the YA Twitter “detectives.”

We’ll await the podcast/TV show/movie/book series that comes out of this scandal.