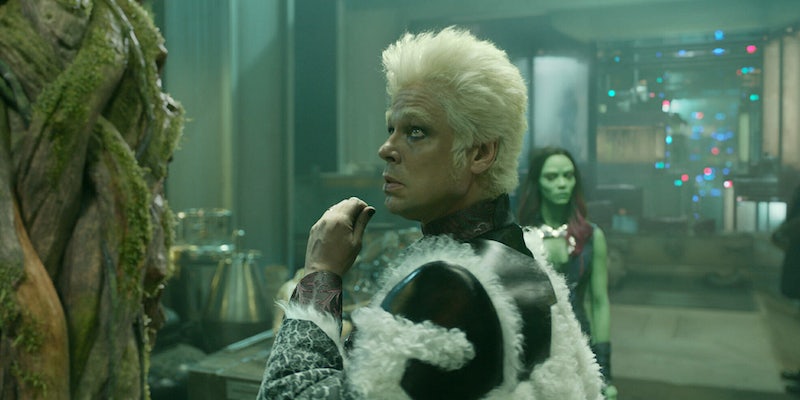 Guardians of the Galaxy Vol. 1/Wikia

Do we finally know the last ‘Guardians of the Galaxy’ Easter egg?

It was hidden in plain sight.

Along with the obvious pop culture references, the Guardians of the Galaxy movies are full of obscure Easter eggs from Marvel canon. Director James Gunn is happy to confirm or deny them on social media, revealing this year that fans still hadn’t found one lingering Easter egg from the first movie in 2014.

Well, it looks like that search has finally come to an end. YouTuber Second Son thinks it was a blink-and-you’ll-miss-it moment in a scene with the Collector (Benicio del Toro). In the background of the scene, we see a purplish humanoid face that Second Son believes is the Sentience of the Universe, a character from the Marvel mythos.

Since the Sentience is linked to the classic planet-eating supervillain Galactus, this could create a future connection between the MCU and the Fantastic Four franchise. (Galactus, for those who aren’t embroiled in the nitty-gritty of Marvel property disputes, is currently owned by Fox. So in theory, he could be brought in for an MCU/Fantastic Four crossover if the Disney/Fox merger is finalized.)

James Gunn hasn’t commented on this video yet, so we await his response with bated breath. Has the Easter egg hunt finally come to an end?