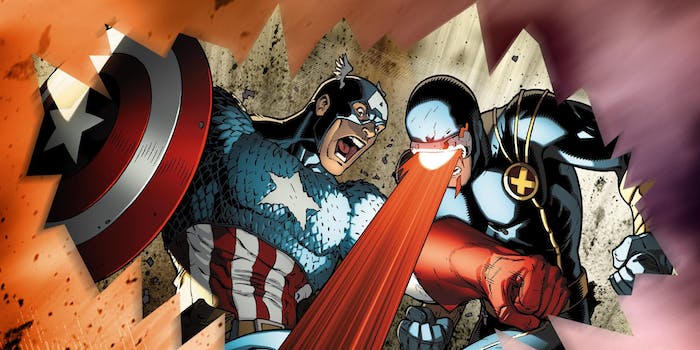 3 big questions comics fans have about the Disney/Fox acquisition

It's fun to speculate about Marvel franchise crossovers, but the Disney/Fox deal has a dark side too.

As soon as the news broke that Disney might buy Fox‘s entertainment assets, superhero fans began wondering about what that could mean for the Marvel franchise. Would Fox’s X-Men join Disney’s MCU? Would it precipitate a total reboot of Fox’s Marvel characters, or would we see crossovers between, say, Ryan Reynolds‘ Deadpool and Tom Holland‘s Spider-Man?

With a deal expected to go through (and indeed it went through Thursday), here are the three biggest questions on every Marvel fan’s lips. The first two are fun speculation, but the last is a great deal more troubling.

1) Will the X-Men and Fantastic Four join the Avengers universe?

This seems like an obvious “yes.” Marvel Studios wants creative control of as many Marvel properties as possible, which is why it negotiated so hard for Sony’s Spider-Man: Homecoming to be a crossover. Fans have been clamoring for years for the X-Men to join the MCU, and there’s no reason for Disney to keep the franchises separate.

The only hiccup is how Disney would integrate the MCU and the world of the X-Men. Disney previously introduced the Inhumans with an X-Men-like narrative in the TV franchise, but that didn’t pan out. Could they use the same concept for the X-Men, with mutants appearing spontaneously in the MCU? It might come off as a little repetitive. Otherwise, Disney would either have to reboot the whole Marvel franchise or maybe smash the two universes together like in the Marvel event comic Secret Wars. (Hey, it’s possible!)

We won’t be surprised if Marvel producer Kevin Feige already has a plan for how to do this. He worked on the first X-Men movie in 2000, so he’s had plenty of time dream up a smart way of merging the two franchises.

However they figure out the logistics, we can expect Disney to recast the main X-Men characters and hire a different creative team. This means the end of the X-Men franchise as we know it, which—given Bryan Singer‘s fall from grace—may not be a bad thing.

Meanwhile, the Fantastic Four would be much easier to add to the MCU. They don’t need any complicated worldbuilding like the X-Men, and the most recent Fantastic Four reboot was widely loathed. Most fans will be excited to see these characters back in Marvel’s capable hands.

2) What about R-rated superhero movies?

Deadpool is massively popular, but does he have a home at Disney? He isn’t exactly family-friendly, and many fans are concerned that Disney just won’t want to make any more R-rated Marvel movies like Logan and Deadpool. Not just fans, actually. Actors, too.

If this is true, I wonder how the fudge it would affect Deadpool? https://t.co/66RNUDU80S

This is a complicated question, and ultimately impossible to predict. However, there is a ray of hope for fans of adult superhero movies. Disney is a massive company, and while “Disney movies” are always family-friendly, you can’t say the same for every Disney subsidiary. For instance, Disney owned the Weinstein Company from 1993 to 2000, during which time it released Pulp Fiction and Kill Bill.

With Marvel movies playing to a diverse audience of adults and kids, this could provide an impetus for Disney to make more adult-rated movies. Deadpool and Logan were critical and commercial successes, and if Disney restricts the entire Marvel franchise to PG-13 ratings, it may alienate some adult fans.

3) What does this mean for the comics industry?

In recent years, Marvel Comics put the Fantastic Four on the backburner and attempted to give the Inhumans a more X-Men-like role in the comics universe. The Disney/Fox deal may lead to a resurgence in Fantastic Four and X-Men comics, but that’s where the good news ends.

Amid all the superhero speculation, it’s easy to lose sight of what this situation actually is: an encroaching monopoly in the entertainment industry. Disney controls the future career of anyone working on those media properties at Fox. The studio will likely prioritize heavy-hitters like Marvel and Star Wars, which could mean phasing out some former Fox franchises that provide direct competition. You don’t want to compete with yourself, after all. To use Marvel as an example, just think about how long it took Disney to launch a female-led franchise. Between Captain Marvel and Fox’s plans for Dark Phoenix and Mystique, we would’ve seen two or three female-led franchises at the same time, plus others waiting in the wings. Will that still happen now? On a more serious note, the same could happen for smaller Fox projects whose subject-matter clashes with Disney’s ethos, or are too similar to existing Disney properties.

Then there’s the matter of online streaming services. Disney is launching its own service, and that means you could see a lot of those old Fox movies disappear from Netflix and Amazon. Instead of seeing most of your favorite movies on one or two streaming services, you’ll soon be encouraged to pay for another.

It’s important to remember that while Disney is responsible for some of your childhood faves, this corporation is not your friend. Just last month, Disney attracted backlash for blacklisting the L.A. Times, a decision made to punish the Times for publishing an article about Disney’s unsavory business practices in Anaheim.

Outside Marvel, the Disney/Fox deal could have a negative impact on the comics industry in general. Fox also owns the rights to a ton of other geek culture properties including Aliens, Predator, and The X-Files. Many of these have tie-in comics published at Dark Horse Comics, which previously suffered a blow when Disney bought Star Wars. After decades of Star Wars comics being published by Dark Horse, Disney moved the franchise in-house to Marvel. The same could happen with these Fox-owned titles, taking a lot of business away from Dark Horse—one of Marvel’s competitors. Once again, this is starting to sound a lot like a monopoly. Oh, and Fox owns a minority stake in the indie comics publisher Boom! Studios. That means Disney could get first-look rights to Boom! Studios adaptations too.

When you’re talking about something like internet service providers, it’s not hard to see why monopolies are bad. Disney’s Marvel assets add a fun twist to the Fox acquisition news, but ultimately, this kind of media empire will have worrying repercussions.

Update Dec. 14, 8:51am CT: Disney has acquired 21st Century Fox in a historic deal. In its announcement, Disney highlighted the benefits of X-Men returning to Marvel Studios.