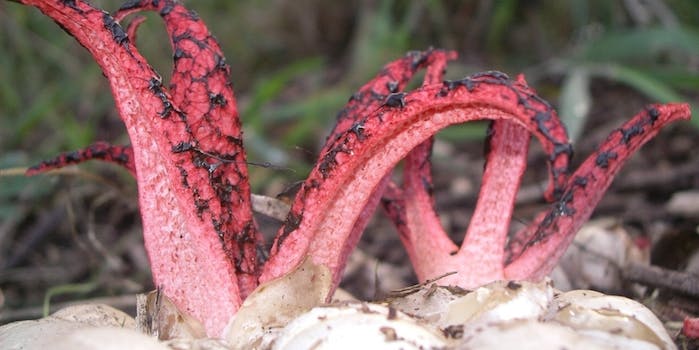 This mushroom looks like the hatchling of Cthulhu himself

Fungi are gross and weird

Fungi are important to life. Without them, we wouldn’t have penicillin, beer, or forests. But they can also be really gross. Disgusting, honestly. To prove this, look no further than the Devil’s Fingers fungus, which is pretty much an H.R. Giger xenomorph in this creepy footage:

According to the Nerdist, this fungus is native to Australia and New Zealand (natch) and is not only gross-looking but gross-smelling as well. The tentacles produce an odor akin to rotting flesh to attract flies and insects, who then carry away its spores on their feet so it can reproduce and form yet more foul-smelling tentacles.

Fungi are bizarre in several ways. While it may be tempting to think of them as being like plants, they actually more closely resemble animals. Plants take in carbon dioxide and expel oxygen, but fungi, like animals, do the reverse and “breathe” oxygen. Many fungi also need plants to survive, and vice versa. They form an alliance underground with tree root systems where the trees and fungi exchange nutrients with each other. The plants can even “communicate” with one another, using the fungi as a sort of organic Internet, according to the BBC.

Most of the time, we don’t see fungi because they exist as microscopic spores or little networks of filaments underground. What we typically think of as a mushroom is just one part of its whole life cycle: the fruiting body phase. And they are as bizarre as they are beautiful and/or gross.

Fungus: for when you need a reminder that nature is actually grotesque and terrifying.