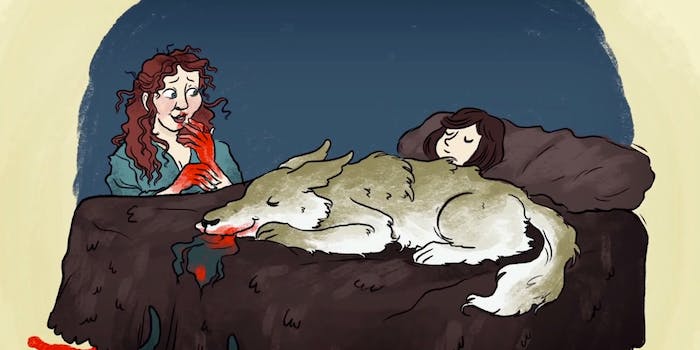 Too bad it takes you two decades to get to the end.

Everyone loves a good bedtime story. Here’s one for Game of Thrones fans: the soothing nighttime sounds of rain on the castle roof and direwolves sinking their teeth into human flesh.

Mashable isn’t pulling any punches with its loving parody of popular children’s bedtime tale Goodnight Moon and George R.R. Martin’s grisly fantasy series. A Song of Ice and Fire may make for terrible bedside reading, but imagining the kinds of stories the denizens of Westeros tell their kids at night does make for a hilarious parody.

In reality, of course, if GRRM were writing this bedtime story, it might take him 20 years to reach the end. Our venerable father of dragons started writing Game of Thrones in 1991 and published it five years later. With any luck, we’ll have the sixth book in the series, Winds of Winter, before the decade’s out.

Screengrab via The Water Cooler/YouTube