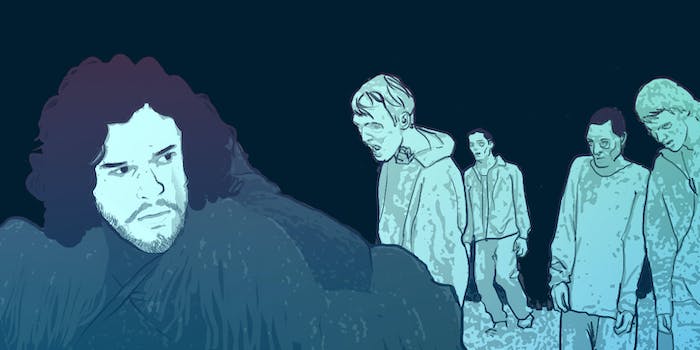 Warning: This article contains spoilers for The Walking Dead.

Two of the biggest ambiguous deaths on TV have united the zombie apocalypse and Westeros like never before.

Many Walking Dead fans were stunned to see Glenn Rhee’s fate left purposely ambiguous in Sunday night’s episode after he was ambushed by Walkers, but for fans who also watch Game of Thrones, it looked and felt very familiar. For them, another character just met a similar fate. Jon Snow’s death was gratuitously filmed, yet few now believe him to be dead (or at least that he’ll stay that way).

People, #TheWalkingDead is just like Game of Thrones. Unless you see someone CLEARLY die, they're not dead. Take a deep breath.

People quickly picked up on the realization that Glenn, whose death people doubt more by the minute, was just like Jon. And it led to “Jon Snowed” becoming a thing in the TV pop culture lexicon: When a character is shown to be killed on-screen—usually in a gratuitous way—but is later revealed to have miraculously survived or been resurrected, almost in a deus ex machina kind of way. The newly coined device of being “Jon Snowed” may or may not result in the audience becoming cynical about a show’s abilities to actually show huge character deaths.

With the theories and comparisons growing everyday, it was only a matter of time before someone managed to combine the two characters into one glorious mashup.

And now that we think about it, Glenn and Jon have a lot more in common than just being ambiguously dead on TV. They’re both one of the few inherently “good” characters left in their world (or as close as you can get to it), and they’ve both stepped into a leadership role they may not have wanted. Both Jon and Glenn know a thing or two about killing Walkers, and their deaths may have been caused by someone they shouldn’t have trusted. And they both have some excellent hair.

The major difference is in how the shows have been handling those deaths: Game of Thrones is fighting a losing battle to convince people that Jon is actually dead while The Walking Dead is purposely leaving it open-ended. How their fates are ultimately revealed could also diverge.

Until then, both Glenn and Jon will live on in our hearts and fan theories.