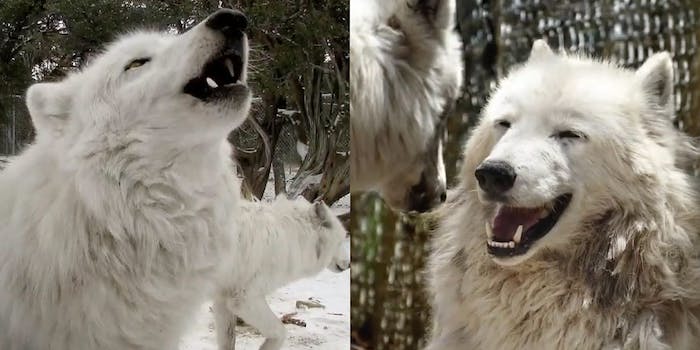 George R.R. Martin mourns the loss of the ‘real-life Ghost’

He originally named him and a number of other wolves after 'Game of Thrones' characters.

George R.R. Martin took to Twitter this week to mourn the loss of an animal close to his heart.

He revealed that Ghost, a white wolf residing at the Wild Spirit Wolf Sanctuary, had recently died. Martin called the wolf the “real-life Ghost,” because of his striking resemblance to Jon Snow’s white direwolf on Game of Thrones

In loving memory of the real life Ghost from the Wild Spirit Wolf Sanctuary. He passed this week & he will be missed. R.I.P pic.twitter.com/FHGRpagEiC

The New Mexico-based nonprofit rescues and provides a home for wolves and wolf-dogs bred in captivity, and Martin been a long-time supporter. He teamed up with the sanctuary a few years ago for a charity auction that raised more than $200,000. As part of the fundraiser, two people paid $20,000 for Martin to name a character after them and kill them in one of his A Song of Ice and Fire novels. Wild Spirit Wolf Sanctuary also has the Westeros Pack, a group of wolves that Martin and his wife, Parris, named after Stark children’s direwolves and other Game of Thrones characters. If you “adopt” one of them you’ll receive a certificate signed by Martin.

However, as is sometimes the case with a 140-character limit, some people initially believed that the wolf Martin was mourning was the wolf who played Ghost in Game of Thrones. Martin later clarified that point on Twitter and noted that a different wolf had passed away.

Clarification, this was the wolf rescued by Wild Spirt and dubbed Ghost. NOT the wolf who plays Ghost on the show. https://t.co/SesDFCWBjc

On the Wild Spirit Wolf Sanctuary’s website, Ghost is described as being “by far the bravest of his four companions, which can give him a mischievous streak.” The sanctuary also paid tribute to Ghost on Facebook, saying that Ghost passed away “peacefully at home.”

“We howl our deep appreciation to you for encircling us with support and braving the tough times with us,” the Wild Spirit Wolf Sanctuary said. “We celebrate our handsome Ghost and know that his story of rescue helps to teach the world about the injustice of holding wild-spirited animals captive.”

RUN FREE, GHOST ~ Our hearts ache today as we say goodbye to our beloved rescue, Ghost, of our Westeros Pack. We are thankful he passed peacefully at home. We howl our deep appreciation to you for encircling us with support and braving the tough times with us. We celebrate our handsome Ghost and know that his story of rescue helps to teach the world about the injustice of holding wild-spirited animals captive. Change comes when suffering is brought to light and people stand strong together and never never never give up! Run free with the Big Pack in the Sky and howl in our hearts forever, beloved boy!

Posted by Wild Spirit Wolf Sanctuary on Tuesday, May 23, 2017