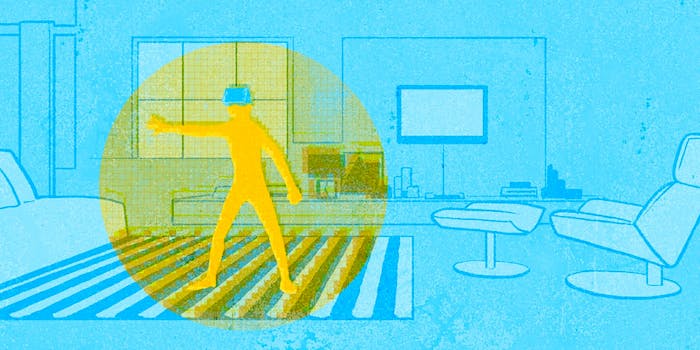 The Virtual Reality Developers Conference is far more popular than anyone expected.

Virtual reality is more popular this year than even the largest game developers conference in the world expected.

It’s one thing when Oculus, the standard bearer for VR in the eyes of casual observers, hosts an event like Oculus Connect, which benefits the interests of the company. GDC, on the other hand is one of the best barometers we have for the way things are going holistically in the video game industry, and it appears that the writing is already on the wall for this year’s conference. Virtual reality is here to stay, and anyone still dismissing VR as a fad ought to reconsider.

The first two days of GDC are historically scheduled around “summits,” or themed conference tracks. The arrival of a new summit usually reflects changes in game development culture and the industry at large.

At GDC 2012, the addition of an advocacy track reflected the growing recognition within the video game industry that the roles and depictions of women and people of color in game development and games themselves were issues that required long-term thinking and efforts to address.

This year, not only did virtual reality receive its own slate of topic-specific panels, it also technically has its own conference. Attendees were able to register specifically for VRDC. VR-related panels on Monday prioritized seating for VRDC attendees. The panels were so popular pretty much everyone else had to head straight to an overflow room.

What’s changed is that VR is no longer just a theoretical proposition, or Kickstarted hardware serving as a rough-edged proof of concept. The Oculus Rift starts shipping this month. The HTC Vive room-scale VR system ships in April. Sony on Tuesday afternoon is showcasing a slate of games for the upcoming PlayStation VR peripheral for the PlayStation 4.

The long-term prospects for VR as a consumer product are still a matter of debate, but as long as software and hardware developers are interested in the technology it will continue to evolve, and each evolution changes the odds. The fact that VDRC panels on Monday were overwhelmed at least suggests an immediate future where that evolution will continue.

Another sign that VR development may have reached a critical mass is the diversity in how people are tapping into the technology. One of the VRDC conference tracks is not concerned with video games at all. A panel on Monday delivered by journalist Nonny de la Peña discussed her VR documentaries made to cover issues like hunger in the United States, treatment of prisoners at Guantanamo Bay, harassment of women at Planned Parenthood by anti-abortion protestors, and conditions in war-ravaged Syria.

Within the the video game-centric VRDC track, a growing diversity in the way game developers specifically have tapped into VR is readily apparent. Jesse Schell, formerly the creative director of Disney’s Imagineering Virtual Reality Studio and now CEO of Schell Games, taught VRDC attendees the lessons his studio had learned during the development of the Oculus Rift game I Expect You To Die. The player takes the role of a spy who has to solve puzzles or be killed.

Schell talked to the audience about the idea of not breaking the illusion of the player being in another place. You likely won’t be pleased if you spend a ton of money on a VR rig and the games constantly pull you out of the illusion you paid for.

When Schell and his team received a set of the new Oculus Touch hand input devices, and put a pair of virtual hands into the game, they realized that the player had to be wearing a pair of black leather gloves. “If the hands look too masculine, or too feminine, or too white, or too black, or too whatever, your body would say ‘These aren’t my hands,’” Schell said, “they’re somebody else’s hands.”

The mind can be fooled by virtual reality, but only so far. The job of a VR developer is to figure out the degree to which they can trick you.

Other developers at VRDC focused on the lessons learned creating “room scale” VR content, and they face a number of unique challenges that represent the next stage of VR’s evolution.

Curtis Hickman, co-founder of The Void—a mixed-reality, theme-park-like experience that combines VR, force feedback, physical sensations like feeling a breeze and scents pumped into the room—is working at the forefront of innovation. “It feels much less like a game and more like you are doing something, and for me that’s the goal,” Hickman said.

But you can also go too far in making the virtual seem real. Schell showed the audience a video of a playtester for I Expect You To Die collapsing to the ground when she turned around in her chair, and reached out to support herself on the back seat of a car that did not actually exist. Hickman had a similar and more severe potential mishap to deal with. Someone in The Void almost tried to dive headfirst into a nonexistent pool of water.

VR’s potential to fool people with the technology is still in its relative infancy, and with developers are already showing so much interest, it won’t be surprising if more regular consumers start wanting to try it—especially if the price comes down.

The job of the developers at VRDC is to make sure that once you put the headset on, you won’t want to take it off.