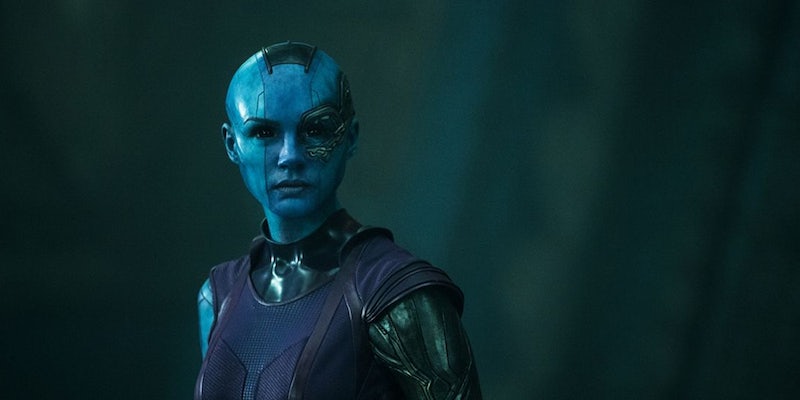 Ah, the double-edged sword of deleted scenes. On the one hand, you get to see some brand new footage from a movie you enjoyed. But if it’s too good, then you start wondering why they deleted it in the first place.

This newly revealed deleted scene from Guardians of the Galaxy may have Nebula and Gamora fans feeling a little annoyed. Not because it’s a bad scene, but because it would have given the characters a lot more depth if it had been left in the actual movie.

Gamora and Nebula are the adopted daughters of Thanos, but while both went through extensive training and modification, Gamora became their stepfather’s more trusted lieutenant. Gamora also made the decision to turn against Thanos, eventually leading to her joining up with the other Guardians of the Galaxy.

The GotG trailer implied that Gamora and Nebula’s relationship would have a pretty major part to play, but in the end it was relegated to a single fight scene and some sketchy exposition. Nebula, played by Doctor Who’s Karen Gillan, was little more than a one-note sidekick villain. This scene shows us a glimpse of a Nebula/Gamora relationship that almost seems reminiscent of Thor and Loki: Gamora as the more successful older sibling, and Nebula as embittered sister who never quite made it into the limelight.

Guardians of the Galaxy did manage to pass Bechdel test, but it wasn’t great for women in general. Hopefully the sequel will give us a more in-depth look at characters like Nebula and Gamora and scale back on the many scenes between Star-Lord, Yondu, and their crowds of space pirate dude friends.