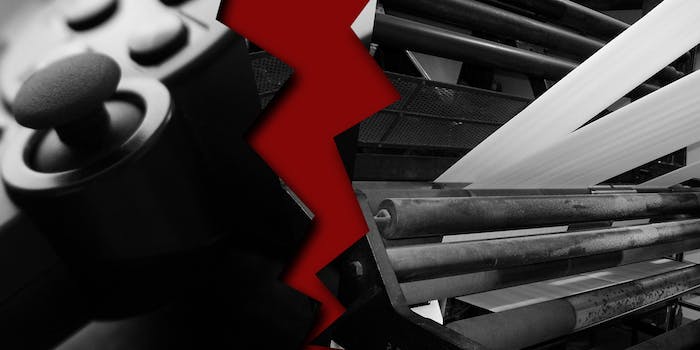 The facts just don't add up on Gamergate.

Gamergate proponents say their cause is not about harassing women but rather about ethics in journalism. The problem is, they haven’t been able to point at any ethical breaches. In six weeks.

The only thing Gamergate was able to dig up was the discovery that a small number of writers for Polygon and Kotaku were friendly with developers or financially supported their work through crowdfunding. Both Kotaku and Polygon looked into these allegations and determined there was no special treatment in their journalists’ reporting. The sites did, however, amend their policies regarding conflicts of interest to prevent any appearance of impropriety in the future. No evidence of any real breach of ethics between those reporters and their subjects emerged.

In fac, there has not been a single, demonstrable, proven breach of ethics in the video game journalism industry cited by supporters of Gamergate since the movement began. And in a post on Raw Story, writer Amanda Marcotte demonstrates that Gamergaters are actually part of a coordinated assault on the ethics they purport to be seeking.

There is no misunderstanding that Gamergate began as a disclosure about a private affair by a heartbroken twenty-something, which trolls on 4chan then manipulated into a hate campaign . The only charge Gamergaters have brought to bear in making their case that Gamergate is not about harassing women is a thoroughly-debunked accusation that a game developer slept with a gaming journalist in order to get coverage for her game.

Others have pointed to the existence of a mailing group for video game journalists, whose existence was hardly kept secret, as proof of conspiracy. Disclosure: the author was a member of that list. It was used mostly for seeking names of freelancers available for assignment, arranging groups to play co-op modes of pre-release copies of video games for review, and exchanging pictures of cats.

Marcotte’s post, on the other hand, runs through all the ways in which Gamergaters are giving away their game: that they do not actually care about ethics in video game journalism. Their original target Zoe Quinn was a game developer, not a game journalist. Anita Sarkeesian, the producer of the Tropes vs. Women video series, who was recently targeted by a domestic terrorism threat by a Gamergate supporter, is an academic researcher who is independently-funded and thus devoid of financial corruption.

Gamergaters have also attempted to shut down other researchers who have presented arguments that undercut Gamergaters’ positions, such as the solid case for labeling Gamergate as a hate movement. Members of the Gamergate movement have attempted to bring websites making anti-Gamergate arguments into line by interfering with the advertising on those websites, thus violating the separation between editorial and sales that is the cornerstone of journalistic ethics.

Now that the mainstream media has finally brought the weight of its collective attention to Gamergate, now that the largest video game industry organization has decried the movement , and now that the internet seems to have finally had enough of this hate group, arguments like Marcotte’s will likely grow louder and more frequent. The best approach for reasonable Gamergate supporters—the people who honestly believe that the movement is about ethics and corruption in journalism—is to stop trying to fend off charges about the movement’s true purpose and begin presenting cogent, clearly demonstrable proof that the their ethical concerns are valid.

Unfortunately, as a recent infographic about the use of the Gamergate hashtag shows, it is becoming increasingly difficult for anyone to make the argument that Gamergate is about anything other than harassment.

Clarification: This story was updated to include information about Polygon and Kotaku’s disclosure policies.