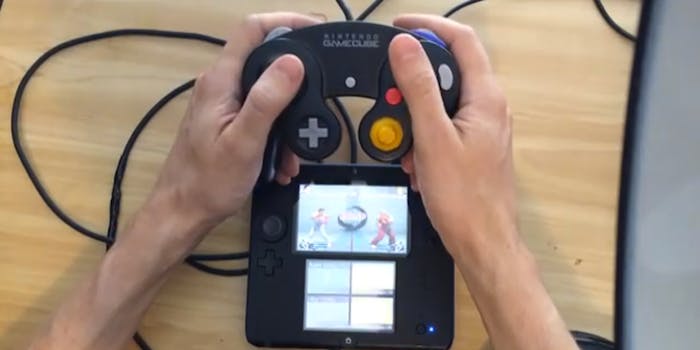 You can play your Nintendo 3DS with a GameCube controller

What could this mean for the new Super Smash Bros.?

The Nintendo 3DS is a great system, but the buttons and circle pad just can’t compare to a traditional controller.

On the forums of 3DSCapture.com, modder “Loopy” seemed to agree. He  was able to construct a GameCube controller to make it work with his Nintendo 2DS. The final product definitely works. Loopy uploaded a video to his YouTube channel, and the comments were instantly flooded with people asking if he was going to sell it or if he would put out a video showing how to make it. Even popular esports team and Super Smash Bros. channel VG Bootcamp asked to buy the device.

There are clear implications for how this mod could affect the online play of the upcoming Super Smash Bros. for 3DS. We were able to get hands-on with the game during E3 earlier this year. It takes a bit of adjusting to get used to playing the fighter without a thumb stick. The game would definitely benefit from a 3DS attachment like the Circle Pad Pro, but with a GameCube controller layout. Who knows, maybe Nintendo or a third party will make such a contraption.