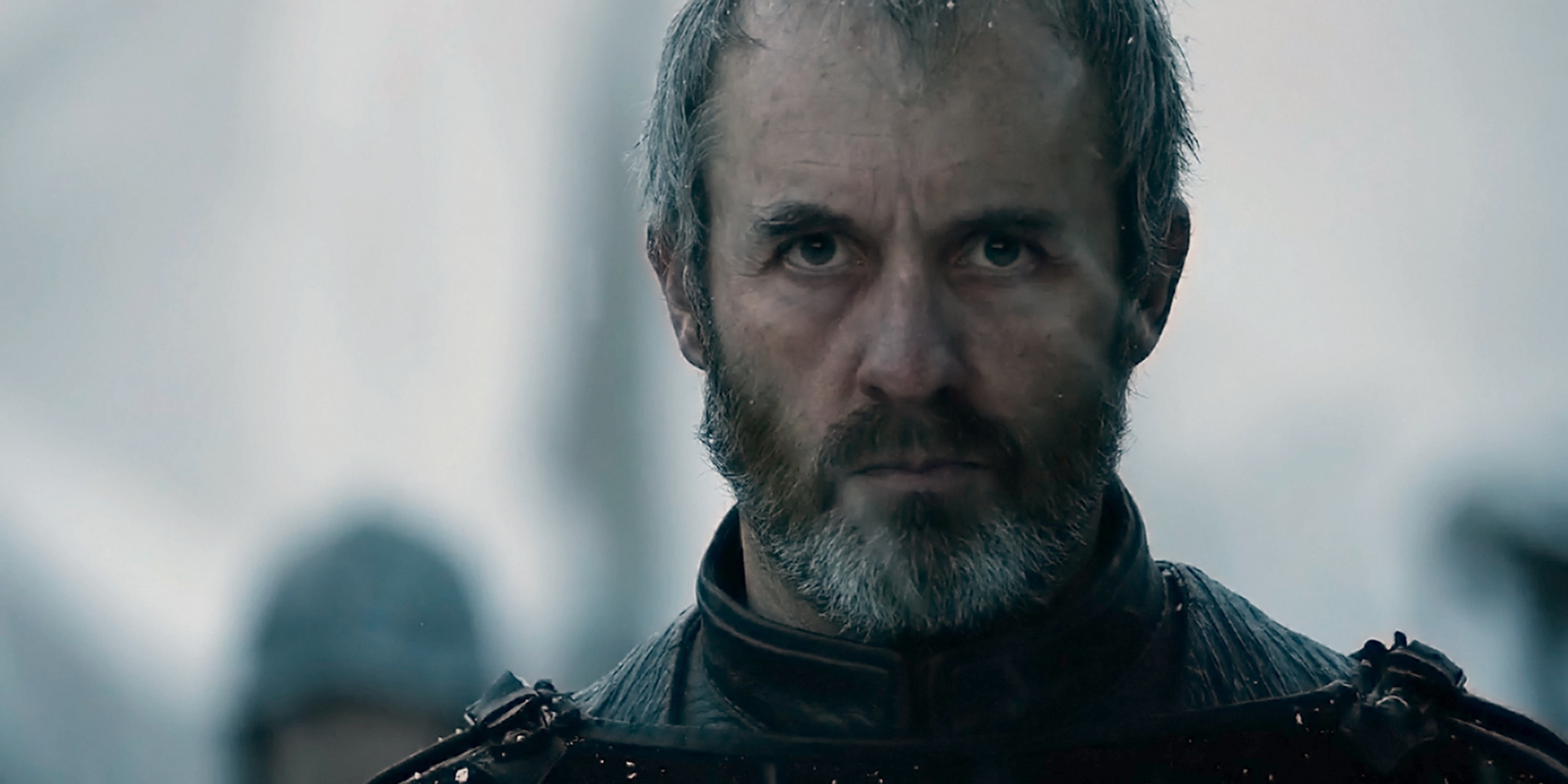 Stannis the Mannis he is no more.

This episode contains spoilers for Game of Thrones and A Song of Ice and Fire.

The ninth episode of a Game of Thrones season has a reputation for being both epic and absolutely devastating.

In “Baelor” we saw Ned Stark’s death—and it dismantled the belief that the main character was safe. “Blackwater” featured the first episode-long battle. We all remember what happened at the Red Wedding during “The Rains of Castamere.” And “Watchers on the Wall” saw Ygritte’s death as the wildlings finally attacked Castle Black.

“The Dance of Dragons” certainly followed suit. Sure, we saw one of the most anticipated scenes from A Dance with Dragons brought to life. Surrounded by enemies, Daenerys Targaryen escapes Daznak’s Pit on top of Drogon, and it was just as incredible as those in the know imagined (even if it does start the Neverending Story comparisons). The episode also brought about the latest death of a beloved character that’s sure to infuriate fans well beyond the end of the season.

We should’ve known, really. Shireen Baratheon, who’s gotten so much screentime this season (a surefire sign a character might meet her doom), was burned alive as a sacrifice to the Lord of Light at the command of her father Stannis. Melisandre may have lit the pyre, but Stannis as good as did it, if you take it from the fandom.

Everyone to Stannis rn #GameofThrones pic.twitter.com/o5TkS1CRoL

Attempting to retain proper critical detachment; OTOH if anyone touches a hair on Shireen's head I SWEAR TO GOD #GameofThrones

Never has a father gone from #1 Dad to Worst Dad Ever in such a short time. #Stannis #GameofThrones

He’s Stannis the Mannis no more. Stannis the…Baddest? We’re still working on it. Man, Davos is gonna be so pissed when he gets back to the encampment.

For some, it was yet another episode featuring violence against women at the hands of men in order to advance a male character’s plot. If Stannis wins Winterfell, it may have very well have been because of Shireen’s sacrifice. Instead of the Blackwater situation, where you don’t know who you want to win because it’s Stannis (a character we might not like, but at least he’s not a Lannister) going against Tyrion (a character we do like), we don’t know who we want to lose more. Maybe Daenerys had the right idea when she just noped the hell out of there.

In the battle between Stannis and the Boltons, I'm rooting for casualties.

And an explanation from showrunner Dan Weiss (who wrote “The Dance of Dragons” episode along with David Benioff) in a postmortem interview with Entertainment Weekly doesn’t exactly make us feel better about the whole thing. He also reminds us that Stannis and Melisandre are religious fanatics and they’ve been burning people alive for awhile now.

“It’s like a two-tiered system,” he noted. “If a superhero knocks over a building and there are 5,000 people in the building that we can presume are now dead, does it matter? Because they’re not people we know. But if one dog we like gets run over by a car, it’s the worst thing we’ve we’ve ever seen. I totally understand where that visceral reaction comes from. I have that same reaction. There’s also something shitty about that. So instead of saying, ‘How could you do this to somebody you know and care about?’ maybe when it’s happening to somebody we don’t know so well, maybe then it should hit us all a bit harder.”

It’s the second payoff of Shireen’s big bonding scene with her father a few episodes back. Their sweet moment showcased greyscale yet again, but an episode later we saw why the disease kept coming back up when Ser Jorah Mormont caught it from a Stone Man. The second one was even crueler. He had already refused Melisandre’s suggestion that he sacrifice Shireen earlier in the season because she has “king’s blood.” And after an attack on his camp from Ramsay Bolton and his men that left them without food or supplies, he was desperate enough to sacrifice his daughter—his heir—to turn the tides. His eyes are pretty much dead as he visits Shireen in her tent.

It’s also a vast departure from the books. For one, Shireen is still alive at the end of A Dance With Dragons. She’s safe at Castle Black with her mother Selyse and Melisandre (which, after this episode, might not be so comforting now). The idea of Shireen being sacrificed for the Lord of Light wasn’t something that surprised people. They just thought that Melisandre would do it behind Stannis’s back to potentially resurrect Stannis himself or someone else of importance; even in a sample chapter of The Winds of Winter Stannis is informing his men what to put Shireen on the throne at all costs in case of his death.

George R.R. Martin did warn us that Benioff and Weiss were even “bloodier than I am.” He hasn’t commented on the episode yet, but any response would likely be along the same lines as previous comments on controversial episodes: The books are the books and the show is the show.

But as an “Inside the Episode” segment revealed, it was actually Martin’s idea to kill Shireen as a decision between ambition and familial love. (And possibly one that may happen in yet unpublished chapters.)

“When George first told us about this, it was one of those moments where I remember looking at Dan and was just, it’s so, so horrible and so good in the story sense because it all comes together,” Benioff explained. “From the beginning, the very first time we saw Stannis and Melisandre they were sacrificing people, they were burning people alive on the beaches of Dragonstone. And it’s really all come to this. There’s been so much talk about king’s blood and the power of king’s blood, and it all leads ultimately, fatally, to Shireen’s sacrifice.”

But that leads to another question: Is king’s blood even effective?

A couple seasons back, Melisandre burns leeches with blood of Gendry in them (a bastard son of Robert Baratheon) and calls for the deaths of the “false kings” to Stannis. By the time Shireen burns, two of the three names are dead; only Balon Greyjoy remains. It turns into a question of fate versus free will in the sense that, did Melisandre make the Freys, Lannisters, and Boltons conspire together to take down a king? And did she cause Littlefinger and Olenna Tyrell conspire to kill another?

So is Melisandre’s magic, which she admits is partially a bunch of tricks and illusions to fool men, enough to win Winterfell for Stannis? We’ll have to wait, but either way we’re not going to like the answer.