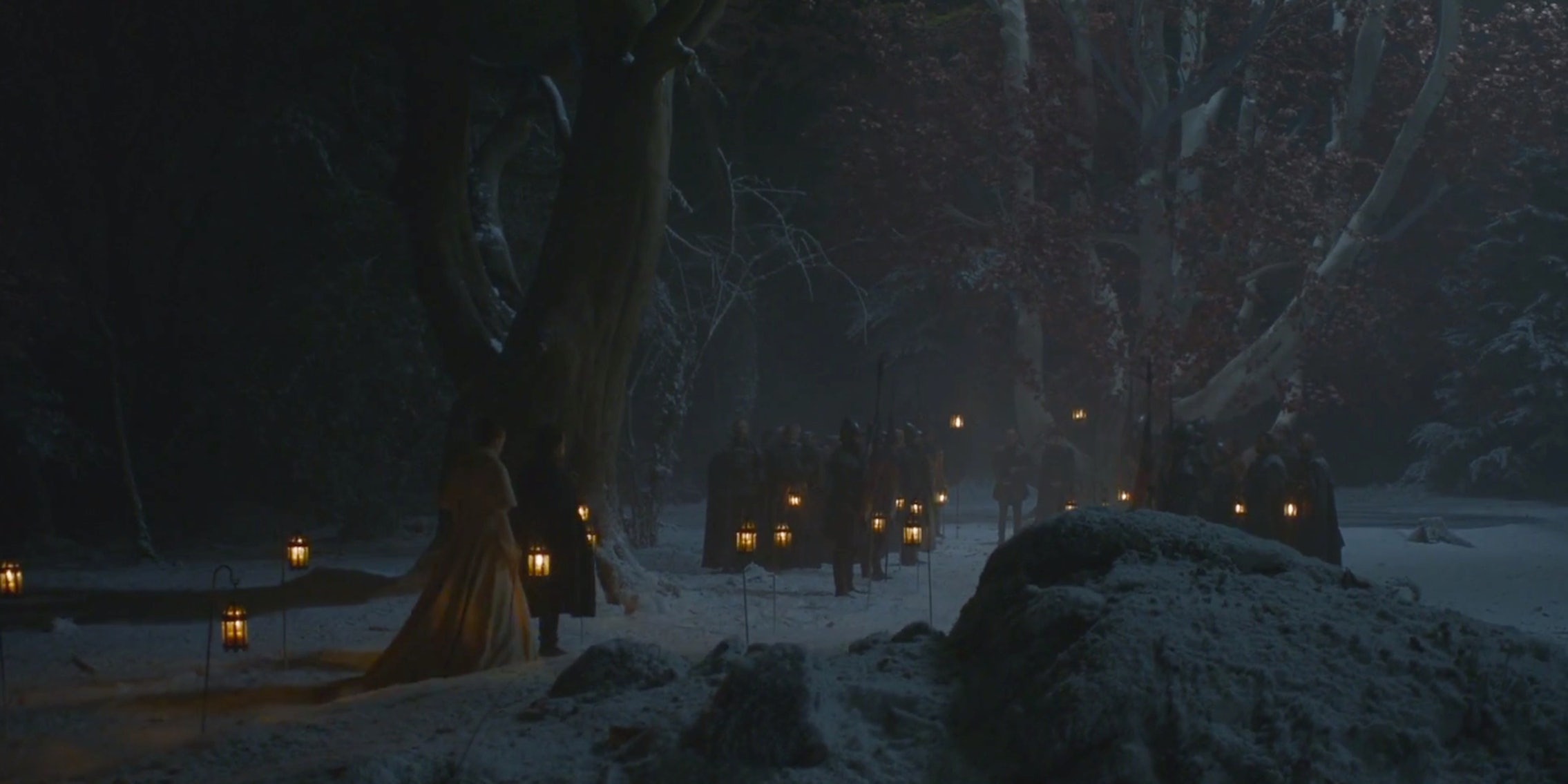 'Game of Thrones' takes Sansa down a dark path meant for someone else.

Anyone hoping for some sort of happiness for Sansa Stark this season, who finally returned home to Winterfell, had that reality yanked from them, stabbed, and probably stomped on for good measure at the end of “Unbowed, Unbent, Unbroken.”

A vast departure from her book plot in A Feast for Crows, Sansa has been set up by Littlefinger this season to give the Boltons the legitimacy to rule the North they need by marrying Roose’s bastard son Ramsay. Sansa is taking the place of a character in the book, her childhood friend Jeyne Poole, who was forced to pretend she’s Arya Stark and marry Ramsay.

Though we know the real Arya is a world away in Braavos, the Boltons and the Lannisters weren’t about to let her disappearance hinder their plans to take back the North. They are using Jeyne—a Northern girl who knows the local territory and customs—as a stand in. Some book fans, knowing what Jeyne endured as Ramsay’s bride, had hoped Sansa would only be taking on part of the role.

For his part, Littlefinger told the truth when he hatched the plan to marry off Sansa: He didn’t know that Ramsay has a reputation for being a sadistic monster, which is far clearer (and more graphically evidenced) in the books.

But last night after Sansa and Ramsay exchanged their vows in the godswood, Ramsay showed her his true colors. In a scene where “romance dies,” he rapes her on their wedding night and makes Theon Greyjoy watch. The only saving grace is that we didn’t actually see the scene, but hearing it happen wasn’t necessarily a “better” option.

As the credits rolled—sans music—people began to process what they had just seen, and they weren’t happy.

And well, pissed doesn’t even begin to cover it.

Game of Thrones: Using a woman's rape as a sympathy building character moment for a male character. Wrong, gross, and bad storytelling.

If fans didn’t stop watching after Cersei and Jaime Lannister’s infamous sex scene in front of their son’s corpse last season, this might’ve been the final straw. And for those people, this episode solidified that decision.

Also, judging from Twitter there was a horrible all-rape episode of Game of Thrones. Maybe it's for the best that I'm not caught up.

Twitter informs me I made the right decision to stop watching Game of Thrones a couple years ago.

Man, the ending of last night's #GameOfThrones was really disturbing. I honestly wish I hadn't watched.

Critics have largely blasted the writers for how they portrayed sexual violence on the show over the years—particularly with the altar scene in season 4— and some of them are already directing those same criticisms toward Game of Thrones showrunners David Benioff and Dan Weiss and Bryan Cogman, who wrote the episode. Some, such as Vanity Fair‘s Joanna Robinson, weren’t having it with Sansa’s rape being the thing that finally motivates Theon to snap out of it. She says that “it was in the books” isn’t even a good defense anymore.

“I’m afraid that is the show’s interpretation, based on where the camera lingered,” she wrote. “But the last thing we needed was to have a powerful young woman brought low in order for a male character to find redemption. No thank you.”

For others such as Slate’s Amanda Marcotte, the scene, while terrible, “didn’t feel gratuitous or unserious” and applauded the show for treating it without any ambiguity and for what it was: rape.

Whether the show needed to portray yet another rape—particularly involving a character we’ve seen grow up over the past five years—will be debated amongst fans. Cogman described Sansa’s decision to marry Ramsay as “a hardened woman making a choice, and she sees this as the way to get back her homeland.” As actress Sophie Turner put it, if you don’t feel bad for Sansa after the scene “then you really have something wrong with you.”

George R.R. Martin stressed yet again that the books and the show were different entities, but with Sansa in a very different place, both physically and mentally, than she is in the books, we can only wonder where her plot will go from here.

As book fans may remember, the whole scene is actually much worse in A Dance With Dragons.

After the wedding, Ramsay has Theon take “Arya” (AKA Jeyne) to his room. He orders Jeyne to get undressed, gets angry and hits her when she is not aroused, and orders Theon “get her ready for [him]” by going down on her. In this case, we don’t actually see the rape take place, just that Theon does what he is ordered to.

Marriage for Jeyne is a nightmare. When she isn’t being raped by Ramsay she’s confined to a tower and cries constantly; her maids notice bruises on her body. Her misery, noticed by other Northern families, is even more damaging to their faith in the Boltons than Stannis Baratheon’s march on Winterfell.

When asked by Entertainment Weekly’s James Hibberd about whether the show would go there (the scene hadn’t been filmed when the interview took place), Cogman seemed horrified at the idea.

““No!” Cogman said. “Lord, no. No-no-no-no-no. No. It’s still a shared form of abuse that they have to endure, Sansa and Theon. But it’s not the extreme torture and humiliation that scene in the book is.”

Will Sansa’s life take on the refrain of continuous torture like her book-plot counterpart? From the preview, she still appears to be upset when Ramsay kisses her cheek, but she’s also seen talking to a scarred Theon, telling him that “My family still has friends in the North.” So it’s hard to tell, but she may yet try to control her own destiny.

With next week’s preview also hinting at Stannis marching closer to Winterfell we can only hope that he gives the Bolton bastard what he deserves.