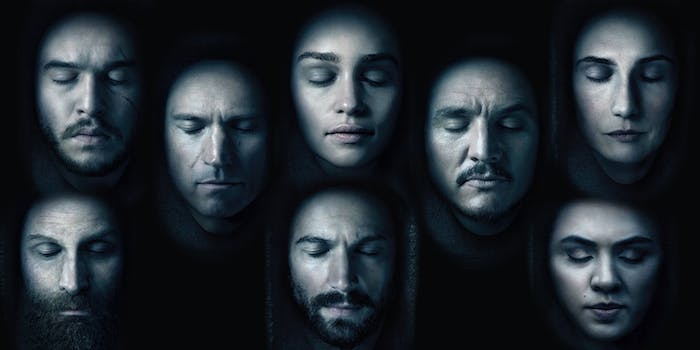 The team behind Game of Thrones is doubling down on the House of Black and White’s Hall of Faces—shown prominently in the first season 6 teaser—for its newly released character posters.

There will be 16 posters in total, according to Entertainment Weekly, and they’ve been rolling out over the course of the morning on social media and through a few site exclusives, including at EW, The Hollywood Reporter, Variety, TVLine, and IGN.

The posters feature characters both dead and alive, so having a particular character’s face on a poster doesn’t say anything about their fate—although we’re pretty sure that Game of Thrones is just straight-up trolling us about Jon Snow at this point.

The same goes for Catelyn Stark, whose appearance on a poster will likely only fuel the flames of a long-awaited storyline that has yet to grace the screen.

Many of these posters share the same characteristics. Aside from Jon’s, they’re all accompanied by a telling quote from the character, one that could foreshadow the character’s path in the next season.

The posters are still rolling out, so we’ll add more as they are released.

“I will do what queens do. I will rule.” #GoTSeason6 #GameofThrones pic.twitter.com/cI5onqH1Pk

“If you want justice, you’ve come to the wrong place.” #GoTSeason6 #GameofThrones pic.twitter.com/1y4beVxftu

And here’s the overview.

Send a raven.
Check out the official posters for #GoTSeason6 premiering 4.24.16 pic.twitter.com/MDNEHHNAv8

Some of these characters may be dead, but that doesn’t mean they can’t cause trouble for those still living. The ramifications of their actions and deaths can tear kingdoms apart.