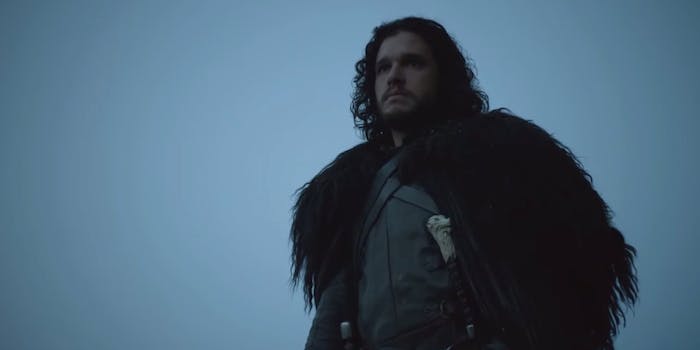 These visions are of more substance.

We finally had a trailer, but the Three-Eyed Raven had to give us one more Sight before flying off north of the Wall.

The Sights have fascinated and frustrated fans ever since Game of Thrones introduced the bite-sized teaser flashes back in late November, both for what was seen and what we couldn’t watch again due to the nature of the mobile trailers, leaving this writer a little more than tiffed at the whole campaign.

But after handing us breadcrumbs for months, the Raven finally delivered something of a little more substance. It’s not exactly a new trailer, per se, but we got a continuous scene—and one more than 10 seconds long.

The first one features our favorite buddy adventure comedy duo, currently in a bit of a rut, both in its mission and morals.

“All I ever wanted was to fight for a lord I believed in,” Brienne of Tarth told Podrick Payne. “The good lord is dead, and the rest are monsters.”

The latter features a couple of characters who, the last time we saw them, didn’t exactly have a happy reunion.

Jon Snow knows what lies north of the Wall. Mance Rayder likely found out too when he managed to unite all of the Wildlings under his banner, and his time in prison hasn’t stopped him from refusing to bend his knee to anyone.

But one thing is for certain. We don’t know whether we’ll get any more official trailers, but at least we won’t be getting any of these Sights anymore.

H/T Watchers on the Wall | Screengrab via GameofThrones/YouTube