There’s an official ‘Game of Thrones’ coloring book for grownups

At last you can throw your own Jazzberry Jam Wedding!

Forget the Red Wedding and the Purple Wedding. Thanks to the newly announced Game of Thrones coloring book, you can make sure all of your infamous nuptials are hued in Jazzberry Jam, Purple Pizzazz, or Razzle Dazzle Rose.

The new coloring book for adults will feature 45 images based on characters and scenes from the series. Presumably, the activity will be a particularly vital form of therapy for stressed-out fans of the series. Now you can finally give Joffrey his royal due by coloring him a nice shade of Eggplant, or imbue all of the Three-Eyed Raven’s visions with a hue of Robin Egg Blue or Granny Smith Apple.

And, of course, if the death scenes aren’t gruesome enough for you, well, now you have over a dozen shades of red to choose from.

There have been numerous other attempts at making a Game of Thrones coloring book in the past, but none of them have had the official George R.R. Martain stamp of approval. There’s even an online version, which allowed us to color Jon Snow as a sparkly shoujo heroine: 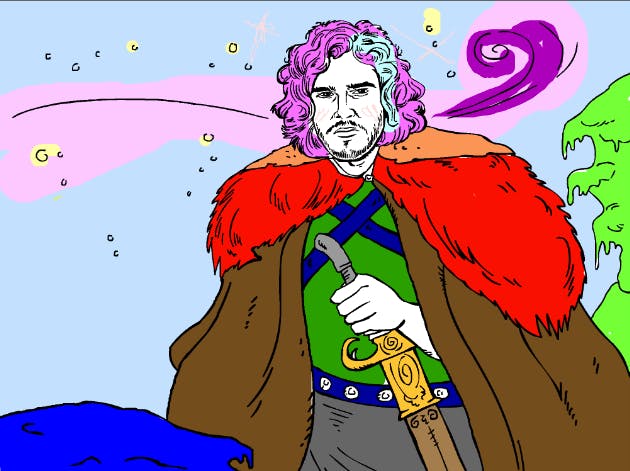 The coloring book won’t be out until October, but in the meantime you can enjoy the boom in adult-oriented coloring books—or just content yourself with the endless amount of Game of Thrones fanart that will make you wish you’d done more than just colored inside the lines in pre-school.

Photo by markturnerimages/Luxuriaz (CC BY 2.0)