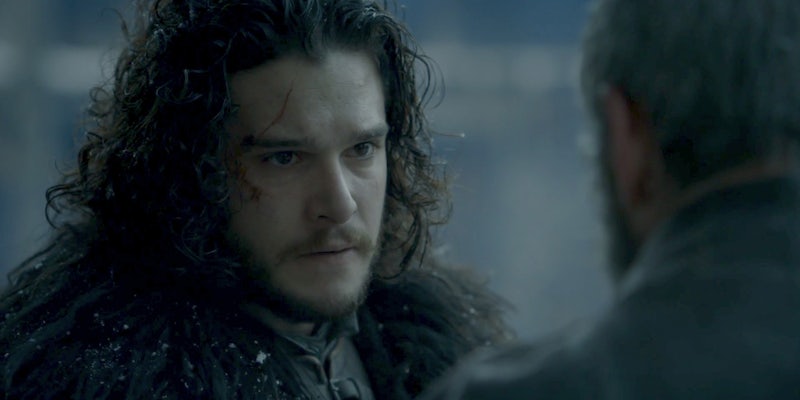 This article contains spoilers for season 6 of Game of Thrones and A Song of Ice and Fire.

Is one of the worst-kept secrets in Westeros finally out of the bag?

A new report from Watchers on the Wall claims that Kit Harington was spotted on the Game of Thrones set in Saintfield, Northern Ireland, on Thursday. It’s a huge battle scene—one that may take place during season 6’s ninth episode—that will involve the Boltons, the Umbers (a northern family loyal to the Starks), and the wildlings, among other armies, but sources tell WOTW’s Sue the Fury that Harington was also participating in the shoot.

Filming being setup for a winter battle scene for Game Of Thrones #GameOfThrones #WinterIsComing @WiCnet pic.twitter.com/tylJShQXN9

When asked by commenters if there were White Walkers or wights present on-set, Sue the Fury said that it “sounded like a big-ass Northern battle to me” and that the scene isn’t a flashback or vision from someone like Bran.

If this is the case, it’s a much different story from what Harington, Game of Thrones showrunners David Benioff and Dan Weiss, director David Nutter, and HBO programming president Michael Lombardo have been telling the audience (and President Barack Obama) for the past three months: Jon Snow is dead, and he’s “not coming back next season.”

There are parts of the fandom (including fans of the show and the books) who don’t believe this for a second. They’ll put on their tinfoil hats and look at all of the evidence that says otherwise: Harington’s frequent trips to Belfast—the most recent sighting was with Iwan Rheon on Wednesday—and his ever-famous hair, the color of his eyes in that final scene as the camera pulls away, Jon’s non-appearance in the HBO Store’s “In Memoriam” section, and the many, many theories backed up by the books. Even if Jon is dead, like the powers that be have said, there’s no way he’s not also coming back.

While we debate yet again if this is enough evidence to suggest if Jon is actually back, let’s focus not on how he made it out of that mutiny alive (regardless of whether he died first) but rather another pressing question: How did Jon end up in the middle of a battle with the Boltons, the Umbers, and the wildlings, hundreds of miles away from Castle Black?

It’s a scene that has yet to happen in A Song of Ice and Fire, and it’s unclear if it will occur in The Winds of Winter or if it’s a battle created strictly for the show. The last we saw these players they were all in a much different position.

Jon, after receiving the Pink Letter allegedly from Ramsay Bolton, attempted to desert the Night’s Watch to rescue Arya, who he believed to be at Winterfell. Regardless of whether Ramsay wrote the letter, he’s probably going to be extremely mad that Theon and Jeyne Poole (a role played by Sansa Stark in the show) have escaped Winterfell. And the Umbers, while fiercely loyal to the Starks, have split their allegiances between the Boltons and Stannis Baratheon. (They haven’t really been a huge presence in the show to date, but Rickon Stark and Osha are advised to go seek shelter with them at the end of season 3.)

And while it’s unclear which side everyone is on in this battle—are the Boltons and Umbers fighting the wildlings, have the Umbers rebelled from their false lords and teamed up with the wildlings, or is it a free-for-all?—we have to wonder how Jon plays into this, and why he isn’t at Castle Black. One explanation: If he dies and then is resurrected by someone like Melisandre, he could potentially be released from his Night’s Watch vows.

Back in 1999, a fan asked George R.R. Martin if there was ever a chance Jon could be released from his oaths as a member of the Night’s Watch. Martin replied, “The great council would have released Aemon [Targaryen] from his maester’s oath, so I suppose it would be possible. With an appropriate authority.” He didn’t elaborate further on what authority, but what if it was Death itself?

When vowing to serve the Night’s Watch, Jon, Samwell Tarly, and every brother that came before him and after him swore the same thing: “Night gathers, and now my watch begins. It shall not end until my death.” Jon himself said it in front of the Old Gods at a Weirwood tree. Technically returning from the dead could free him from that vow, and paired with an angry and fearful Night’s Watch likely ostracizing him even further (they did try to assassinate him after all), he might not want to stay for long at Castle Black.

There’s a lot of time unspoken for between the beginning of the season and when the battle may take place. One possible route Jon could take? Potentially teaming back up with Tormund Giantsbane and the other wildlings who he saved from Hardhome. At this point, they’re probably the only people other than Samwell taking the threat of the White Walkers and wights seriously. From there, it could be a territorial thing or Jon may even discover that Rickon is still alive.

And well, considering what the Boltons did to Robb and Catelyn at the Red Wedding and what Ramsay did to Sansa, of course Jon is going to want revenge. At the point, who in Westeros doesn’t want some good, old-fashioned revenge?