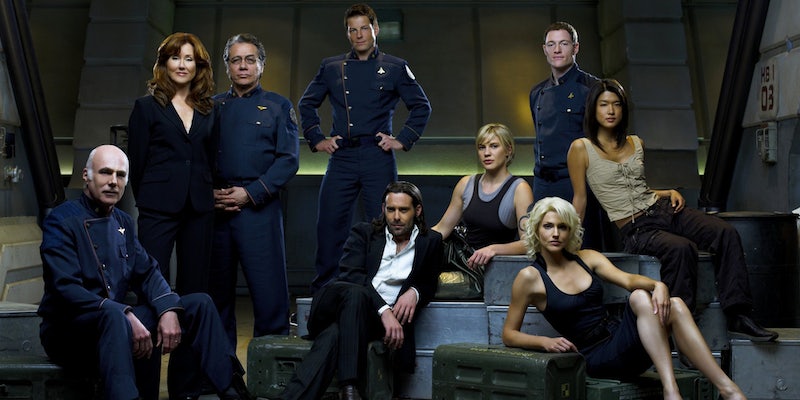 No one expected this convention to cancel its most famous guests just three days in advance.

The world’s biggest Battlestar Galactica convention has been thrown into turmoil after organizers announced multiple guest cancellations at the last minute.

Galacticon 4 will take place in Seattle this weekend, bringing together fans of Battlestar Galactica and other cult sci-fi shows like Firefly and Farscape. The guest list is packed with well-known actors, but attendees were shocked to hear on Tuesday night that most of the BSG reboot cast had been pulled from the lineup.

On the Galacticon Facebook page, organizer Daniel Allen (who has since resigned from the convention) wrote:

“a lot of rumors are floating around about why a lot of our BSG cast has been cancelled. The truth of the matter is that we have lost our room block of Hotel rooms. in light of this I made the decision to do what was in the best interests of our Guests.”

Many ticket-holders are already expressing skepticism about Allen’s “lost hotel room” explanation, which suggests financial problems behind the scenes. The announcement brings back unpleasant memories of the now-infamous Tumblr convention DashCon, where organizers collected bags of cash to keep the event afloat and attendees were offered “an extra hour in the ball pit” as compensation for high-profile guest cancellations.

The Daily Dot reached out for clarification on the circumstances surrounding these cancellations, but Galacticon’s organizers have not yet replied.

Aaron Douglas (Chief Tyrol in the BSG reboot) tweeted that the cancellations were just as much of a surprise to the actors, a sentiment that was retweeted by several other cast members.

Yeah, it's going to be less of a Battlestar con and more of a whoever else is left after the cancellations. Just know: we all wanted to go.

Douglas implied that he thought the BSG reboot cast—who were arguably the main headliners of the convention—had been targeted for cancellation over other guests.

New BSG actors have been dusted.

Completely false. There are rooms available, they're simply unwilling to pay for them for new cast. https://t.co/26tlBu8n71

Actor Richard Hatch, who played Captain Apollo in the original BSG series and Tom Zarek in the reboot, wrote on Facebook: “I’m a little in shock… but for whatever reasons I was on the cut list when the convention decided to reduce their celebrity list attending the event. What further amazed me is that they’ve left most of their non BG guests on board.”

Galacticon attendees are understandably angry, as many fans have already spent thousands of dollars on travel, hotel rooms, and convention passes. But if Galacticon is in serious financial trouble—which would be the most obvious explanation for this situation—then disgruntled fans may have a hard time getting refunds for unwanted tickets.

Update 7:04am CT, July 30: Galacticon operations manager Michael DeVault responded to the situation in an email to the Daily Dot.

The loss of rooms and the subsequent logistical and practical challenges the loss caused impacted not just where people were staying, but a complex series of schedules, events, and support functions, rippling throughout the entire organization. When (former Galacticon executive producer) Dan Allan posted about the integrity of the convention, this is what he meant. Moving actors to distant locations meant creating insurmountable obstacles for executing the convention under increasingly challenging circumstances. Every effort was made by every individual involved to offset the effects, but the changes posed ultimately proved beyond repair.”