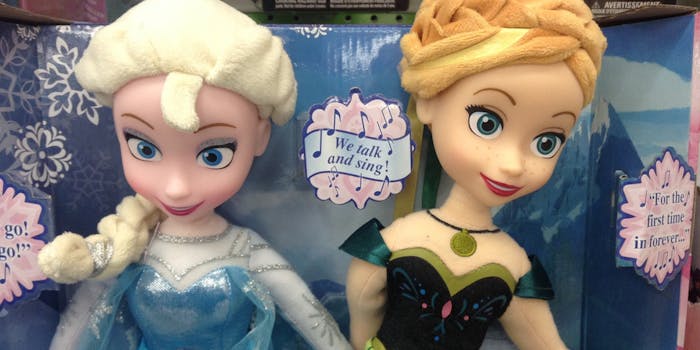 Here’s how to beat the run on ‘Frozen’ holiday gifts

Avoid the bloodbath at your local Disney store and choose from these unconventional Frozen gifts.

The bloodiest battle of the year is upon us.

No, it’s not The Hunger Games or The Hobbit: The Battle of Five Armies. We’re talking about the epic struggle to find an Elsa or Anna doll in stores before Christmas.

Last year’s Frozen holiday shopping madness was particularly vicious because of how greatly demand outstripped supply of the dolls for the two latest Disney heroines—particularly for Queen Elsa. But if you think a year has caused love for the highest-grossing animated film in history to dwindle,  guess again.

So far this year Disney has sold a whopping 3 million dresses in the U.S. based on the costumes of Anna and Elsa—roughly $150 million, or the equivalent to the film’s entire budget. And stores are already selling out of the popular Frozen dolls in anticipation of the holiday season. Some stores have had to institute limits per person on Elsa and Anna dolls. Last week in the U.K., pandemonium reportedly broke out at a Nottingham discount store due to parents fighting over Frozen merchandise.

But with Elsa and Anna dolls in ever-short supply, can you avoid the melee as you shop for your favorite Frozen fan over the next few weeks? We think you can—especially if you circumvent the Disney Store and the local toy department altogether, and focus on a few different kinds of Frozen gifts for your family and friends.

Here are seven unconventional ways to minimize the bloodbaths and maximize your Frozen gift-giving points this holiday season.

Tickets to Frozen on Ice

What: The entire movie retold as a musical ice-skating extravaganza. All the spectacle of a regular musical, but with real ice.

Availability: Medium–Difficult, depending on your location. This might be one worth driving out of town for. But get your tickets early—Frozen on Ice has been doing record-breaking sales around the country.

Affordability: Good. Tickets for the popular national tour start at $12 to $15 and increase up to $90 depending on seating and discount levels.

What: Etsy is teeming with plushie versions of Anna, Elsa, and other Frozen characters. A handmade doll will generally cost less than an official Disney item, be more huggable, and less breakable.

Availability: Good—but order soon if you want to beat the Christmas rush and make sure your doll arrives in time for the holidays.

Affordability: Good–Medium, though as with all things Etsy, quality generally increases with the amount of cash you have to spend.

Here are a few items we liked:

This cloth Queen Elsa takes two to three weeks for creation and delivery, but we think it’s worth the wait. And there’s a ready-to-ship version, too. Price: $54.

This tiny felt doll is adorable, and comes with extra outfits for more fun. Price: $10.

These handmade dolls range in size from 8 to 12 inches and feature designs for all the main Frozen good guys. But they’re apparently made one at a time so get your order in fast! Price: $20.

Again from Etsy, these tutus, capes, fairy wings, and other accessories aren’t just for Halloween, and they come in a wide range of colors and styles. Price: $10 to $50.

What: According to the calendar bestseller chart (apparently such a thing exists), the 2015 Frozen calendar is already the No. 1 calendar of the year in the U.K., having ousted reigning calendar champs One Direction from their three-year dynasty. We figure anything that can trump Harry Styles has to be pretty special.

Availability: Good. Get them online or at your local bookstore or department store.

Affordability: Good. These calendars retail for about $14.

What: The Frozen mania is so enormous that Disney has announced plans to launch an entire suite of grocery products, including food, featuring the Frozen brand. The list includes “apples and grapes, juice, yogurt, bandages and a complete oral-care line.”

Affordability: Good. Grocery items will be extremely affordable, especially if you need to stock up on novelty gifts. Why stuff a stocking with expensive chocolate when you could buy Frozen-branded apples?

What: Online novelty shops like Society 6 and Redbubble are brimming with Frozen fanart, all of which can be easily silkscreened onto a variety of items from framed art prints to mugs to t-shirts, even bedspreads. Getting items emblazoned with fanart instead of sticking with official merchandise lets you broaden your options considerably—and often save money in the bargain.

Art by Westling at Society 6

Availability: Easy. Buy online at one of the stores above.

Affordability: Good–High, depending on what you get. Stickers at Redbubble start at $2, while a silkscreened duvet cover runs around $90 to $100.

What: Japanese figurine-maker the Good Smile Company has been a collector’s dream for years with their adorable Nendoroids, cute toy figurines of all of your favorite fandoms. Next year, they’re releasing Elsa as a special Nendoroid, and people are already clamoring to buy her. And no wonder:

There’s a catch, however; the actual dolls aren’t out until May, and so far there’s no word on when pre-orders will open. If you’re lucky, though, a picture in your Frozen fan’s stocking revealing the cute chibi figurine they can expect in six months might just tide them over until the real thing arrives.

Availability: Medium—Difficult: while these dolls will probably be in high demand, ordering from Japan in the off-season still beats a mad Christmas rush.

Affordability: Medium. The dolls retail at roughly $33 plus international shipping.

What: Japan is just as obsessed with Frozen as the rest of the world, but their specialized Frozen treats are apparently far more delicious than everyone else’s. Take a look at this delectable Frozen collection from Japanese cake-maker Petit Gateau:

Availability: Easy, though navigating the Japanese website where the treats are sold might take a bit of work. Hint: Use Google Translate to help you navigate the shopping cart. You can also buy from Yahoo Japan. If you’re leery of international purchases, check with a local bakery or cupcake shop. You may be able to put in a special order for Frozen-inspired treats.

Affordability: Medium. Treats in the collection range from $2 to $20, plus shipping.

Photo via JeepersMedia/photopin (CC BY 2.0)