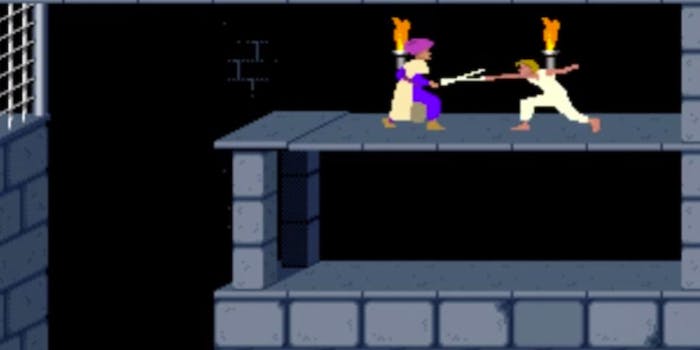 The 20 best free MS-DOS games on the Internet Archive

There are 2,300 games in the MS-DOS archive, but you should just play these.

Gamers rejoiced when the Internet Archive unveiled its collection of more than 2,300 MS-DOS PC games. The best part? You can play them all right in your browser for free.

They’re emulated—command prompts, boot screens, instruction manual DRM and all—with DOSBox software right on the page. Just make the window full screen, fire up some Quantum Leap episodes in the background, and party like it’s 1992. The Archive even boasts a healthy selection of pornographic games, should you fancy a romp in 8-bit erotica.

But 2,000 games creates a bit of a wheat/chaff problem that we hope to alleviate by highlighting the titles that are worth your time. These 20 selections are influential, important, and in some cases, still damn fun after all these years.

If you’ve noticed the indie obsession with “Roguelikes” lately, here’s your chance to experience where it all began.

The reference is to 1983’s ASCII-powered dungeon crawler. The requirements for a Rouguelike: randomly generated levels and permanent death. If you die, that’s it. You’ll never see that exact dungeon again, and you’ll have to start over.

Rogue is full of mystery—scrolls you can’t read and potions with unknown effects. Cautiously (cautiously!) explore and experiment. If the monsters don’t kill you, starvation surely will.

There’s no shortage of Rogue clones, from the beginnings of personal computing to smartphones (Pixel Dungeon is my favorite for Android). But this first iteration has character and depth that goes down in the annals.

Lode Runner is a frenetic arcade platformer with strategy under the hood. Outrun and outsmart your enemies to grab the gold before escaping to harder levels. The franchise’s real power stems from the baked-in level editor that lets players build their own puzzles to challenge friends.

Expressing your own creativity through games is something we take for granted today. Lode Runner had a thriving “mod” community in 1983.

While so many ’90s point-and-clicks favored fantastic realms or galaxies far, far away, Leisure Suit Larry was the first franchise to introduce adult themes of dating, sex, and sleaze in a modern setting (besides games that were explicitly pornographic, of course).

The archive includes four of Larry’s adventures, which are just as challenging, funny, and obtuse as their storybook contemporaries.

While certainly not the first of its kind, Arkanoid is an important marker on the continuum of “Breakout” arcade games.

This 16-bit incarnation broadened the appeal of the genre with new mechanics, unique power-ups and interesting brick types.

There are hundreds of (probably better) clones you could download to your phone for free right now, but the bleeps, bloops, and satisfaction of busting the final block on a challenging level will flip the nostalgia switch for many DOS gamers.

It’s the original civic planning masterpiece from game design genius Will Wright. The franchise has come a long way since ’89, but the core mechanics that make SimCity great are still right there, in all their 2D glory.

Kids today, with their Angry Birds and their Rock n’ Roll music. In my day, artillery games had 16 colors, max—and we liked it that way.

Your objective in Scorched Earth is to destroy the other tanks on the field, and players take turns firing projectiles at discreet angles and velocities. It gets interesting as you purchase new weapons like napalm, MIRV warheads and nukes, which react very differently on the battlefield. Nailing your opponents with precision (and sometimes dumb luck) is extremely gratifying.

Scorched comes from a long line of turn-based artillery games, but it was the first to really popularize the genre thanks to customizable landscapes and multiplayer options.

Sometimes you just need to beat the tar out of a parade of evil henchmen, and that’s OK. If you’re jonesing for a side-scrolling hack n’ slash (especially with two-player co-op), look no further than the PC port of this arcade classic, set in a Conan the Barbarian-esque world.

You can’t visit the MS-DOS archive without at least one trip on the Trail for old time’s sake.

This seminal game has—nevermind, I died of a snake bite.

If you’re feeling particularly adventurous, why not give The Amazon Trail a go while you’re here.

The chasm-jumping, sword-dueling, infinitely frustrating platformer that started it all. If you’re looking for a challenge, you’ve come to the right place. Prince of Persia comes from a time in gaming when deep practice and building muscle memory were the only ways to get ahead. There’s something about the physics of this game—your hero has weight and inertia—that makes it so beautiful and so hard. Do not play in mixed company. You will curse a lot.

Not your traditional point-and-click from Sierra, The Castle of Dr. Brain (and later, The Island of Dr. Brain) offers concrete puzzles rooted in science, math, pattern recognition, music, and art. It’s edutainment thinly veiled as an adventure, but the wacky settings and eccentricities of the titular doctor make it a lot of fun.

MS-DOS has a venerable catalog of important RPGs, the Eye of the Beholder trilogy certainly among them. All three first-person dungeon crawlers are available in the archive. Built as a D&D tabletop game come to life, the series is beloved by fans and lauded by critics. In a similar vein, much of the Wizardry franchise is also available in the archive, and it’s well worth checking out. And if you loved these grid-based dungeon romps as a kid, we also recommend their modern spiritual successor in Legend of Grimrock (and its highly anticipated sequel).

Show me a person who doesn’t want to shrink herself down and explore the cozy, twisty tunnels of an ant hill, and I’ll show you a liar.

Let’s face it: Ants are mad cool, and there’s been no game before or since Will Wright’s “electronic ant colony” that lets you inhabit the world of these super-smart, super-strong insects. Forge chemical trails to rich food sources, wage war with rival colonies, and avoid deadly hazards like spiders and giant human footsteps. And whatever you do, protect the queen!

Forget Ant-Man and sink your mandibles into SimAnt for a while. You won’t be disappointed.

The mother of all first-person shooters, Wolfenstein 3D was a revelation for the gaming industry and laid the groundwork for every DOOM, Call of Duty, and Halo since. It feels dated by today’s standards, but if you really want to go back to where it all began (and kill some Nazis while you’re at it), give it a spin in your browser on your next lunch break.If you prefer your formative FPS with a dungeon crawling flavor, try Catacomb 3D. Instead of blasting Nazi soldiers, you’ll hurl fireballs at orcs and trolls with your magic wand.

While the original Lemmings is sadly not available on this archive, Lemmings 2 is a worthwhile sequel. Assign your absent-minded fur balls the skills they need to survive dangerous, puzzling landscapes—building, digging, floating, blocking. The sequel has some new talents you won’t find in the original.

You’ll have to think fast and strategically or you’ll quickly end up with a pixelated pile of rodent mush.

The landmark franchise had a huge influence on a generation of PC puzzle games, and frankly, there are no modern clones or derivatives that live up to its charm.

Master of Orion (and its two sequels) are pillars of the turn-based strategy pantheon. Like Civilization before it (but in space), players build an empire through exploration, colonization, tech research, and warfare.

The game is remarkably deep and still holds sway in many fan communities who continue to enjoy it on the regular.

Originally for Super Nintendo, this classic eventually made the leap to other platforms, including PC. You control three vikings lost in time and space—each with his own unique abilities. Alternate between them to solve some truly devious platformer puzzles. This game is just solid design all the way through, from level structure to play control. You’ll need quick reflexes and a chess master’s forethought to lead your lovable Norsemen back home.

Very few movie-to-game crossovers are worth a nod, but a handful from the golden age of Disney go down in gaming history as brutal but rewarding platformers. Aladdin and The Lion King are among them because they dutifully evoke the art and character of their films. The hand-drawn scenes give way to some really diabolical levels that often require training to master. It’s hard to imagine playing these without a controller (they were both popular on the SNES as well), but check them out in your browser for a free nostalgia hit if nothing else.

We can’t responsibly present this list without at least a nod to Super Street Fighter II, the benchmark for ’90s head-to-head brawlers. Go ahead, get your Hadouken on. We’ll wait.