We'll just have to put a hold on that Tom Hardy franchise for a while.

With all the recent interest in the idea of Tom Hardy playing the Punisher in a hypothetical Marvel film franchise, many fans overlooked the most obvious place for Frank Castle to turn up: Daredevil.

A few savvy fans, however, speculated that the super-soldier antihero might appear in the second season of the acclaimed Netflix hit to totally upend the morally rigid world of our hero, Matt Murdock.

Congratulations, guys: You were right. The Punisher is coming to face down Daredevil once more. Marvel announced earlier today that Jon Bernthal, best known as The Walking Dead’s hypermasculine Shane, would be appearing on the show as the psychologically scarred Vietnam vet who’s been trained to be the perfect killing machine.

Marvel gushed about the casting choice, noting that Bernthal’s previous roles have prepared him well for the part:

Jon Bernthal brings an unmatched intensity to every role he takes on, with a potent blend of power, motivation and vulnerability that will connect with audiences,” said Jeph Loeb, Marvel’s Head of Television. “Castle’s appearance will bring dramatic changes to the world of Matt Murdock and nothing will be the same.”

Frank Castle is a unique character in the Marvel ’verse in that he’s not actually a superhero, but rather a highly trained soldier who’s been rendered a husk of a human due to the mob-related deaths of his wife and children.

He’s also pretty much the polar opposite of Daredevil. For one thing, Frank Castle is one of the deadliest members of the Marvel pantheon, while Matt Murdock avoids killing at all cost.

Canonically, Daredevil detests the Punisher’s rogue justice and nigh-unstoppable vigilantism. In the ’80s, legendary comics writer Frank Miller helmed a famous run of Daredevil known as the “Child’s Play” arc which set the two heroes at each other’s throats after Castle paid a visit to Murdock’s neighborhood. 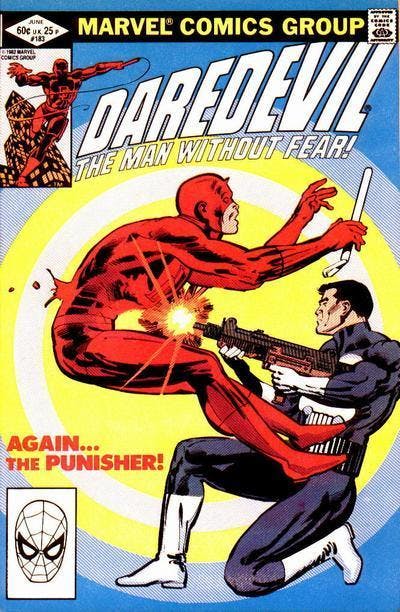 The Punisher’s arrival is also good news for fans of Daredevil’s villain, Wilson Fisk: The two have a violent enmity that’s every bit as intense as the rivalry between Fisk and Murdock. Punisher’s arrival on the scene most likely means we’ll be seeing plenty of action from both characters.

Last fall, Daredevil’s original showrunner, Steven DeKnight, sidestepped questions about whether Frank Castle would be appearing on Daredevil, saying only that he’d love to make a movie starring the character. Since then, new showrunners have succeeded DeKnight, but it’s clear from the show’s overall design and plot that the move to bring the Punisher to Hell’s Kitchen has been in the works a long time.

Meanwhile, DeKnight is still perhaps the person most eager to write and direct Hardy in a big-screen version of the Punisher.

And since the Punisher is now officially a part of the MCU, we’re probably going to be seeing more of him than ever.