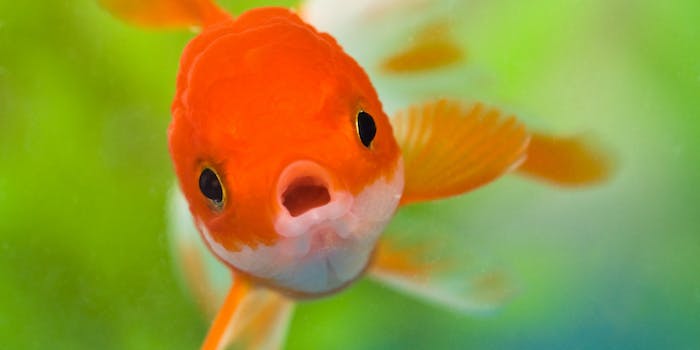 Fish can recognize each other—and maybe you too

And you thought they just had six second memories.

Fish are capable of much more than we give them credit for. They’re often characterized as having three-second memories, but in reality their brains are quite powerful despite their tiny size. Now, a new study published Monday in PLOS One, finds that the daffodil cichlid fish is capable of recognizing individual faces.

Researchers in Japan showed fish images of faces of familiar and unfamiliar fish of the same species. They found that the fish viewed the unfamiliar faces for a longer time and at a further distance than the familiar ones, suggesting they were scoping out the new faces from a safe spot. More importantly, though, it shows that the fish are capable of visually recognizing individuals, rather than just animals of the same species versus different species.

This isn’t exactly surprising to the scientists since this particular species of fish is social, so being able to recognize individuals is advantageous. We know other fish are capable of the same capability, according to National Geographic.

Lots of fish owners insist that their fish do recognize them. They say that their fish will come up and observe them from close to the glass of the tank, but will hide from other people.

Though there is a lot of research on the social habits and skills of fish, we couldn’t find any studies that found any evidence of fish’s ability to recognize their owners. However, the authors of the study said that their research suggested at the possibility that fish may be able to recognize their owners. Lead author, Masanori Kohda said in an email with the Daily Dot that he believed the fish in his lab could recognize him. However, he said that goldfish are not social fish, so it may not be that goldfish are capable of this same skill.