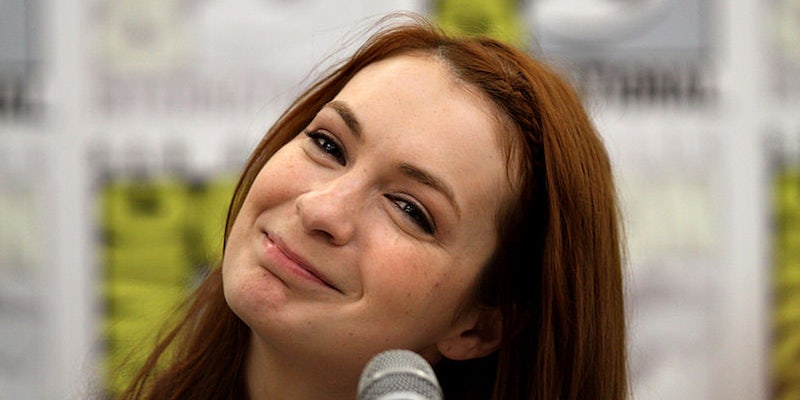 She spoke out to conquer her fear, but the aftermath proved she had every right to be afraid.

Felicia Day broke her silence on GamerGate last night in a moving Tumblr post confronting her fear of harassment and urging other women in gaming not to be scared away from the community they love.

But Day’s post also served as a brutal reminder of how toxic and frightening Gamergate has become, and why Day had every right to be afraid. Shortly after writing about her fear of being doxed, a commenter on the post doxed her.

Felicia Day speaks up movingly against GG, gets doxxed almost instantly. A portrait in miniature of what we face. https://t.co/mlI1ERrUGM

Day’s Tumblr post, “The Only Thing I Have to Say About Gamergate,” was a long and honest look at her own fear about being seen to be supporting Gamergate. “I have tried to retweet a few of the articles I’ve seen dissecting the issue in support, but personally I am terrified to be doxxed for even typing the words ‘Gamer Gate’,” she wrote.

I have had stalkers and restraining orders issued in the past, I have had people show up on my doorstep when my personal information was HARD to get. To have my location revealed to the world would give a entry point for a few mentally ill people who have fixated on me, and allow them to show up and make good on the kind of threats I’ve received that make me paranoid to walk around a convention alone. I haven’t been able to stomach the risk of being afraid to get out of my car in my own driveway because I’ve expressed an opinion that someone on the internet didn’t agree with.

HOW SICK IS THAT?

Day wrote of realizing after crossing the street to avoid two gamers she saw in Vancouver that she had allowed Gamergate to enhance her fear of other people within her community. Her post was an attempt to conquer that fear and to urge other women to do the same.

But less than an hour after describing her past experiences with stalkers in the post, a commenter showed up to do the one thing she feared would happen.

Time between Felicia Day saying she’s against GG and someone trying to dox her: 50 minutes.

#StopGamerGate2014 because even Felicia Day cannot speak out about Gamergate without being doxxed. pic.twitter.com/qxq6usIp2w

Also note the account that doxxed Felicia Day was called “gaimerg8.” So yes, #Gamergate, this doxx is on you. As usual.

Numerous bystanders pointed out that once again, the reaction to Day’s statements proves the lie that Gamergate is about anything other than sexism.

So they doxxed Felicia Day for saying GG was bad. Didn’t dox Will Wheaton. Please, tell me more about how this isn’t about misogyny.

Felicia Day says GamerGate isn’t nice and gets doxxed instantly. Chris Kluwe calls them every name in the book, NBD. Not about women though.

There are not two sides to this. This is a war on the women, critics, and feminists who care about making gaming more diverse and inclusive.

Comments on the post were quickly turned off, but that didn’t halt the reactions from an outraged Internet.

Comments turned off on the Felicia Day post. Now the idiot GoblinGaters can exclaim that they’re being censored and oppressed. Ethics!

This is the legacy of #Gamergate. Women having to hide in fear. Companies threatened into removing ads. Congrats. You’re terrorists.

But on r/KotakuinAction, a key Gamergate hangout, Gamergate members seemed just as angry and upset as everyone else. A thread started by redditor rhoark, “GamerGate condemns doxxing Felicia Day,” garnered more than 200 comments, most in support of Day and in condemnation of the incident.

“I put my real name and reputation behind this movement,” rhoark wrote. “I’m tired of having to constantly disavow anonymous trolls.”

We can’t control what anyone says or does in the name of GamerGate, but we can send a clear message that we don’t stand for it. It does not represent us. If anyone feels unsafe about talking to gamers, it is because Gawker crafted that narrative.

It’s more likely that people are afraid of due to the well-known harassment incidited by gaming culture. The slut-shaming, doxing, and death threats against Zoe Quinn that kicked GamerGgte off, as well as the prolonged and ongoing harassment against Anita Sarkeesian, as well as well-known instances of harassment and abuse of other women in the industry, probably also have something to do with it.

Day is arguably the poster girl for the inclusion of women in the gaming community—even if sometimes the men carrying the posters don’t actually look at her face. When even someone as beloved as Day is within the gaming community can’t speak about the treatment of women in gaming without being harassed or threatened or doxed, the unfortunate result is that more women may feel unwelcome and unwanted in the community, despite all of her encouragement.

Still, her post has more than 25,000 notes on Tumblr, most expressing support—including from notable community members like John Green, Wil Wheaton, and Seanan McGuire.

All my <3 goes out to @feliciaday tonight. Don’t let anyone stop you from speaking your truth. We’ve all got your back.