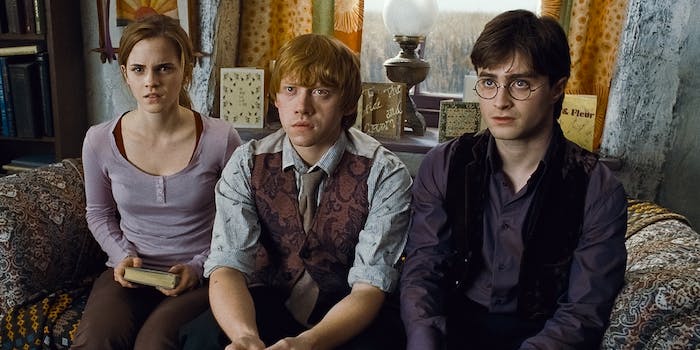 J.K. Rowling reveals she has doubts about who Hermione ended up with

Fans are divided between celebrating and calling "no take-backs!"

Did J.K. Rowling just get her hands on a Time-Turner and send the entire Harry Potter fandom back to 2003? That’s certainly what it feels like, following a shocking revelation that she now questions her decision to have Hermione and Ron end up together in the final installment of the Potter series.

This comment reawakened the kraken that was Harry Potter fandom’s most epic shipping war, the ongoing feud between Ron/Hermione (Romione) and Harry/Hermione (Harmony) shippers. The two pairings were debated endlessly from book 1 onwards, barely even settling down after Ron and Hermione ended up married in the epilogue of Harry Potter and the Deathly Hallows.

And now, J.K. Rowling herself has vindicated thousands of Harmony shippers (or at least, given them a taste of anti-Romione schadenfreude) by saying in an interview:

“I wrote the Hermione/Ron relationship as a form of wish fulfillment. That’s how it was conceived, really. For reasons that have very little to do with literature and far more to do with me clinging to the plot as I first imagined it, Hermione ended up with Ron.”

“I can hear the rage and fury it might cause some fans, but if I’m absolutely honest, distance has given me perspective on that. It was a choice I made for very personal reasons, not for reasons of credibility. Am I breaking people’s hearts by saying this? I hope not.”

Even fans who didn’t really care about the (canonically nonexistent) Harry/Hermione/Ron love triangle are annoyed by Rowling’s statements, because she already has a track record of “revealing” new facts about the series without ever having included them in canon. While she has every right to voice doubts and criticisms about her own work, these new comments are reminiscent of when she announced that Dumbledore was gay.

Many fans were overjoyed to hear that news, but their happiness was tempered with a certain amount of irritation that she hadn’t just included this detail in the books in the first place. To a new reader with no knowledge of the author’s many interviews about her work, there are still no canonically queer characters in the Harry Potter series.

As Tumblr user cresswells wrote, “Someone needs to explain to JKR that once the book is out there, it’s out there.  No take-backs.  You can’t just suddenly announce that Dumbledore is gay and expect HP to be held up as an LGBTQ-positive series.  And likewise, the author changing her mind about a ship in no way affects what was written in the series. Regardless of what you ship, this isn’t a cause for celebration.  It’s lazy storytelling, and JKR should be called out on it.”

The thing is tho JK Rowling’s now that parent who’s looking at her grown up kids and second-guessing the way she raised them. TOO LATE NOW.

How will I explain this to my children? ‘After all that time?’ they’ll say. ‘Always.’ I’ll reply. ‘The Shipping Wars never end.’

THIS JUST IN: GEORGE LUCAS WISHES HE WOULD’VE HOOKED UP LUKE AND LEIA.

Rowling’s Romione revelation also brought back one of the most common criticisms of her work: that she’s just not very good at writing romance. Harry Potter fandom is rife with more fanfic pairings than you can shake a broomstick at, but most of the popular ones have very little relation to the couples that ended up together in canon.

Although Ron and Hermione’s relationship always had its detractors, it’s widely regarded to be one of the few love stories that actually works in canon, with fans often citing Remus/Tonks and Harry/Ginny as examples of unconvincing canon pairings. It even got to the point where Harry and Ginny’s teen romance was actively downplayed in the last two movie adaptations, despite the fact that they had to end up married with children in the epilogue scenes. To many readers, Rowling’s doubts about Ron/Hermione are almost a vindication of the widespread belief that she just doesn’t really know what she’s doing when it comes to writing romance.

And then, of course there’s this: 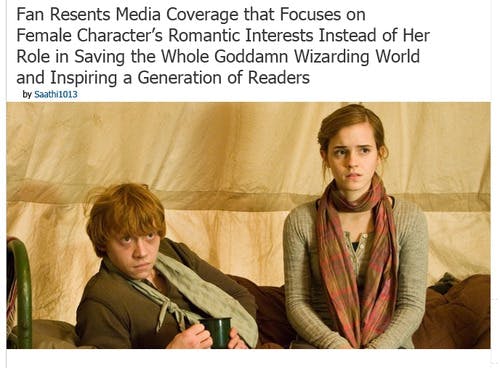 In reawakening the debate over Ron and Hermione’s relationship, Rowling is drawing attention to something that was never a major focus in her books. Thanks to the current Young Adult fiction landscape, we’re now more used to people discussing the merits of relationships in Twilight and The Hunger Games, both of which involve a love triangle as a central aspect of the story. But despite the hugely enthusiastic audience for shipping and fanfic among Harry Potter’s online fanbase, the books themselves were never really about romance. The only major love triangle of the series was James/Lily/Snape, and we all know how that one turned out.

Even when the central characters began to pair up in the final two books, it was always shown as a background storyline to the war raging around them. Rather than having romance be the ultimate achievement of the characters at the end of the series, it was more of an afterthought to prove that in the future, they could be happy together despite the traumatic nature of their teenage years. Ultimately, the trio’s friendship was always more central to the storyline than romance ever was, and Hermione’s role was far from that of a love interest or romantic heroine.

The media coverage of J.K. Rowling’s new interview is very telling. Many major news outlets are prefacing her comments with headlines about how she thinks Hermione should have married Harry instead, even though the interview quotes only mention her having doubts about Ron and Hermione’s relationship. The idea of a Harry/Hermione/Ron love triangle fits in with the current media narrative for Young Adult fantasy fiction, but it doesn’t actually have much basis outside of Harry Potter fandom’s notorious shipping wars.

Ultimately, all this interview tells us is that Rowling is critical of her own work, and that she has certain regrets about how the story turned out — a characteristic that she probably shares with every other author on the planet. It doesn’t change the events of canon, and it certainly doesn’t support the idea of a Harry/Hermione romance.

Right now, the most relevant commentary seems to be coming from YA novelist John Green, in a pithy tweet that’s already been passed around Tumblr and Twitter tens of thousands of times: “Books belong to their readers.” Basically, as soon as Rowling’s books had been published and sent out into the world, their canon was set in stone — regardless of what she decides to say in interviews ten years later. And for everything else, well… there’s always fanfic.