An introduction to the Fault in Our Stars author and YouTube megastar who forms one half of the Vlogbrothers.

If you’ve heard of John Green, it’s probably through one of two avenues: his work as an author or his hugely popular YouTube presence as one half of the Vlogbrothers. However, the scope of the John Green Internet phenomenon can be kind of hard to figure out. For example, what the heck is a Nerdfighter? Why do people keep Instagramming photos of their John Green books? And what’s up with the “Pizza” T-shirts?

If these questions leave you flummoxed (or uncertain whether it’s really worth it to trawl through several hundred hours of YouTube vlogs), don’t worry: We have the answers.

John Green’s books will make you cry. But, you know, in a good way. His best-known work is probably The Fault in Our Stars, currently being made into a movie starring Shailene Woodley. It’s a wistful Young Adult romance/coming-of-age novel about a teenage cancer patient and had a massive fan-following before it was even published. So massive, in fact, that when Green promised to sign every preordered copy of the first edition, he ended up signing 150,000 books. Here’s a video of him standing in front of all the boxes of those signed title pages, in case you don’t believe us:

TFIOS is particularly popular for its heartfelt, sincere take on teen angst, with fans loving to post their favorite quotes on Twitter and Tumblr. This carries on from his earlier novels such as Looking for Alaska (which some compare to The Catcher in the Rye) and Paper Towns, both of which were praised for their literary prose style and ability to make the reader end up like this: 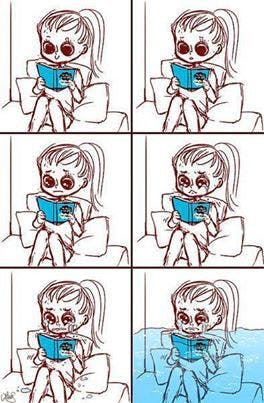 John Green’s YouTube vlog rose to fame after he and his brother Hank started a project called Brotherhood 2.0 back in 2007. The challenge was for the brothers to communicate only via YouTube for an entire year, with penalties for anyone who failed to update promptly. This gained them an enormous YouTube following, so they decided to keep going once the year was up, incorporating various other elements alongside their Ze Frank-style slice-of-life diary updates. They’re now known as the Vlogbrothers and are a central part of the YouTube vlogging elite, with Hank founding the vlog convention VidCon.

In six years of posting multiple videos per week, John Green has covered a lot. Sometimes it’s a personal journal or an educational report from somewhere on his tour schedule, and other times it’s just an attempt to fit as many terrible jokes as possible into three minutes. But no matter what, there’ll be tens or even hundreds of thousands of people ready to watch as soon as a new video uploaded. These viewers make up a community known as “Nerdfighteria,” and individual fans call themselves Nerdfighters. We’ll explain all this in a moment—because it’s kind of a big deal.

If you’re not up to date on at least some of the last six years of videos, we can understand a certain amount of confusion at all the in-jokes and references to things like the Project for Awesome (their YouTube charity drive) or “the yeti” (John’s wife, who is rarely seen on screen). Sure, the community is very inclusive, and you can start watching the videos without any backstory, but it can take a moment to work out why everyone is so obsessed with “the puff” (John’s hair), or why so many Nerdfighters wear T-shirts with pictures of John’s temporarily moustachio’d face and the word “PIZZA”. 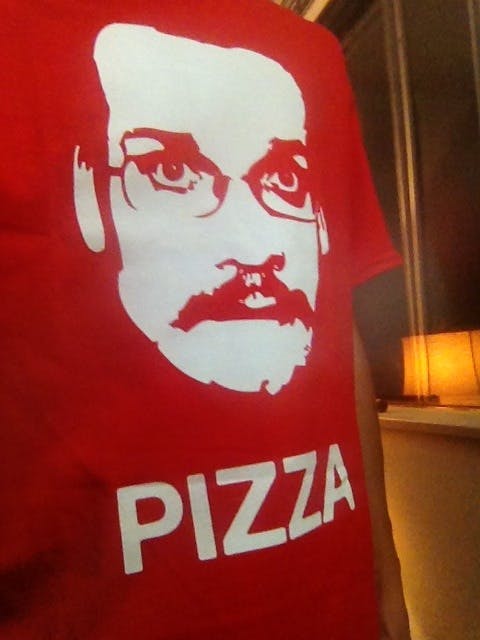 Actually, that one is kind of hard to explain. But suffice it to say that John Green loves pizza, and this T-shirt is an eye-catching way to recognize other Nerdfighters in your general vicinity. Pizza John is so iconic that multiple people have attempted to make a Pizza John picture on an actual pizza, and at least one person has used it to get free garlic bread at Domino’s. Oh, and John’s puffy hair became A Thing because it’s just so… puffy and fluffy. He tends to run his hands through it when he’s stressed or frustrated, leading to a scale that measures his Puff Levels. There’s even an entire Tumblr tag dedicated to the phrase “Puff levels are high.” 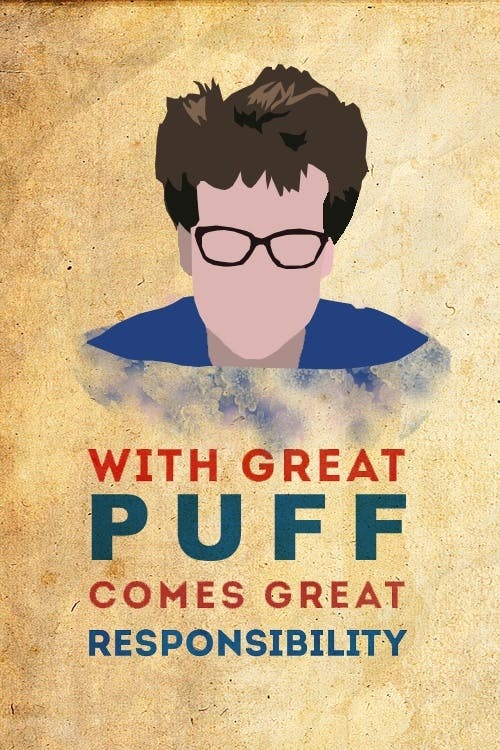 The Vlogbrothers’ biggest joint venture outside of their own channel is Crash Course, a series of educational videos taught by John and Hank Green. Along with healthcare, education is one of the main topics of John’s occasional informative rants on the Vlogbrothers channel, and Crash Course is often used as a teaching aid in real-life classrooms, as well as having hundreds of thousands of casual subscribers. So far, John has taught world history (cowritten by his high school history teacher), U.S. history, and English literature, while Hank has taught biology, chemistry, and ecology.

The great thing about the Vlogbrothers is that they both definitely understand how fan communities work. Hank may be a massive Harry Potter fanboy, but John gets equally excited over plenty of things, from letting random Nerdfighters take over his YouTube channel while he goes on paternity leave, to freaking out over getting to share a stage with John Darnielle of the Mountain Goats. The only difference between John Green and an everyday fan is that Green often gets to meet his idols, meaning that he now seems to be friends with more bestselling YA authors than you can shake a stick at. YA author Maureen Johnson is known as the “secret sister” of the Vlogbrothers and regularly fills in for John when he’s on tour or too busy to make a video.

The true test, however, is how he treats his fans. There is very little barrier between Nerdfighteria and the Vlogbrothers themselves, with John using Tumblr just like us lowly peons—to the extent that there are several “How long will it take John Green to reblog this?” memes floating around the site. Both of the Green brothers have made real friends via Nerdfighteria and even employed people they met through the community. But the most well-known Nerdfighter has got to be Esther Earl, a young Harry Potter fan and vlogger who passed away in 2010 after a long battle with cancer. 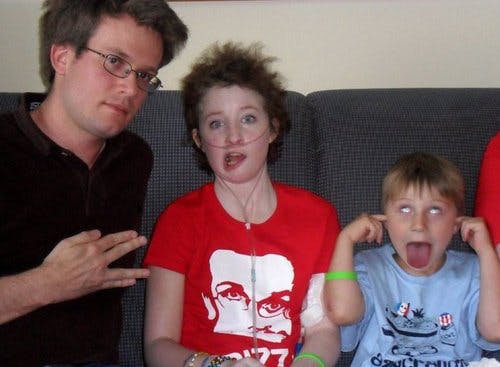 Esther was an active member of the Nerdfighter community and eventually met John and various other online friends thanks to the Make a Wish foundation. Her influence lives on both in the form of Esther Day (an annual vlogging event marking her birthday, described by John as “a kind of Valentine’s Day for all the other kinds of love”) and in that she was part of the inspiration for the main character in The Fault in Our Stars. 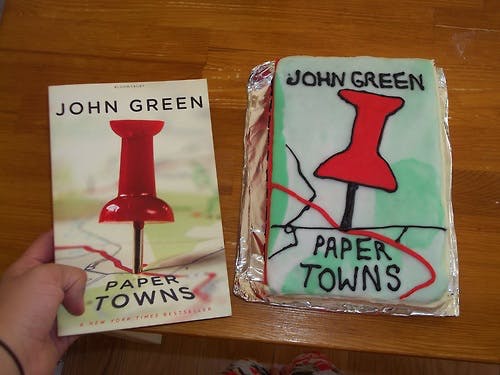 Nerdfighters are an incredibly friendly lot, but even dipping a toe into the community can be intimidating because it’s just so enormous. It has many of the characteristics of a major fandom: an enthusiastic Tumblr community, lots of in-jokes, and numerous fanworks such as homemade posters and hats knit to look like John Green’s books. Nerdfighteria even has a motto (“Don’t forget to be awesome!”) and a hand sign, which Benedict Cumberbatch demonstrates for you here: 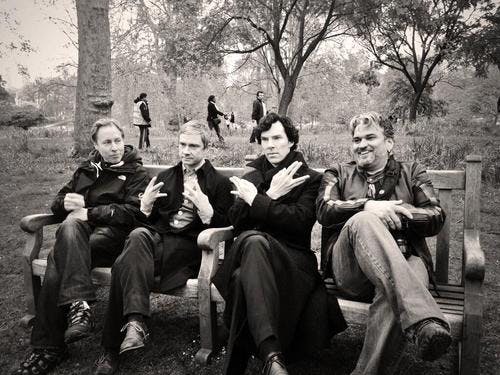 The main difference between Nerdfighteria and a “normal” fandom community is that rather than being a fan of one specific thing (John’s books; the YouTube channel; Hank’s involvement with the Emmy award-winning Lizzie Bennet Diaries), Nerdfighters are connected more by a certain set of characteristics: enthusiasm, bookwormery, and an affinity for teen outcast characters.