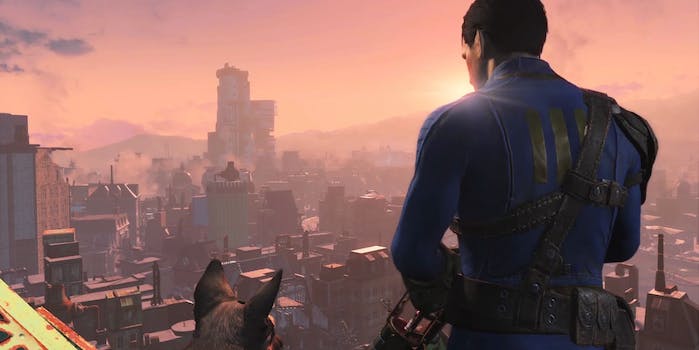 Hands-on preview: Fallout 4 is a perfect fit for virtual reality

Throwing miniature thermonuclear bombs at people and watching them explode into plooming mushroom clouds in virtual reality is not the sort of thing you see every day.

The appeal of Fallout in VR is painfully obvious. The role-playing games developed by Bethesda are designed to be highly immersive worlds. They can be played from a first-person view. Adapting them for VR is natural evolution.

When I showed up at the Bethesda booth at the Los Angeles Convention Center on Wednesday morning for my demo of Fallout VR, E3 attendees had already queued into a five-hour-long line to get a chance to try the game. 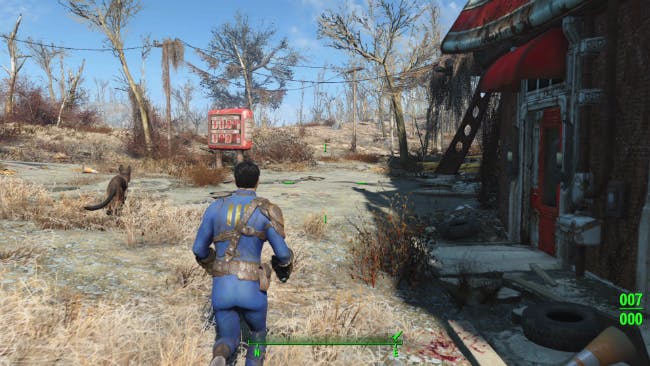 The Fallout VR demo takes place at this Red Rocket station, and it looks *precisely* like this in VR. (Image from Fallout 4.)

The Fallout VR was very short. It’s tough to keep track of real-world time while you’re in VR, but if the Fallout VR demo was longer than five minutes I’d be shocked.

You don’t walk in most VR games. You point a cursor at a location, press a button, and “blink” to that location so quickly that you don’t have enough time to feel nauseous from the change in perspective. As I blinked around the Red Rocket station everything was where it ought to be, precisely as I remembered when I first found the place.

Hell yes, I thought, I’m actually here. I’m really, really hanging out in Fallout 4, in virtual reality. How cool is this shit?

As in Fallout 4, your Pip-Boy computer is attached to your left forearm in Fallout VR, so you just lift your arm up to look at the viewscreen. You click on the touchpad on the left Vive controller to move through the Pip-Boy menus. It took some getting used to, but it works.

Your weapon is held in your right hand and you click on the touchpad on the right Vive controller to quick-change between your guns. In the Fallout VR demo I was equipped with a 10mm pistol, a double-barrel shotgun, and a Fat Man miniature nuke launcher. 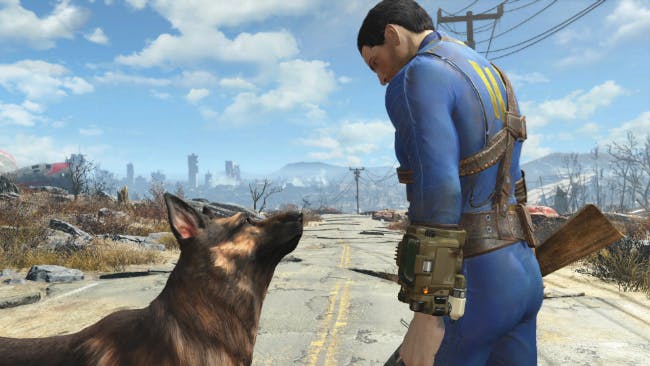 Fallout VR: Like this, only Dogmeat is so close you feel like you could reach out and cuddle him. (Image from Fallout 4.)

In Fallout 4 your canine companion Dogmeat is waiting for you when you first discover the Red Rocket station. He was waiting for me when I first loaded into Fallout VR. Just seeing Dogmeat looking happily at you—he’s a German Shepherd and looks pretty big in VR—was enough to make the demo experience worth it.

Then the raiders showed up, Dogmeat ran at them to defend me, and the fun really got started.

I am terrible at shooting weapons at long range in VR. Pathetically bad unless it’s a rapid fire weapon with tracer rounds. So I had to blink right next to the raiders in Fallout VR to take them down. The bullet impacts were context sensitive, just as in Fallout 4, and when a raider’s head exploded right in front of me after a headshot I burst out laughing for how ridiculous it was, dark humor being a staple of the Fallout series.

Technically that shootout was the end of the demo, just the barest taste of what Fallout VR might be like, but I own a Vive and didn’t need to take any time to adjust to the hardware at the beginning of the demo. That shaved just enough time off the anticipated length of the demo that Bethesda was kind enough to allow me to hang out just a little longer.

So off I blinked down the main street of the town of Concord, right down from the hill on which the Red Rocket station stood, and to City Hall where I knew another pack of raiders would be waiting for me.

That’s when I pulled out the Fat Man launcher.

I had to apologize to Dogmeat for hitting him with the edge of a nuke blast but I couldn’t stop myself from pummeling the raiders with miniature nukes the moment I saw them in the street.

I probably should have been intimidated by literal mushroom clouds exploding right in front of me but I was too busy laughing and cheering because it was some of the most preposterous fun I’ve had in virtual reality. 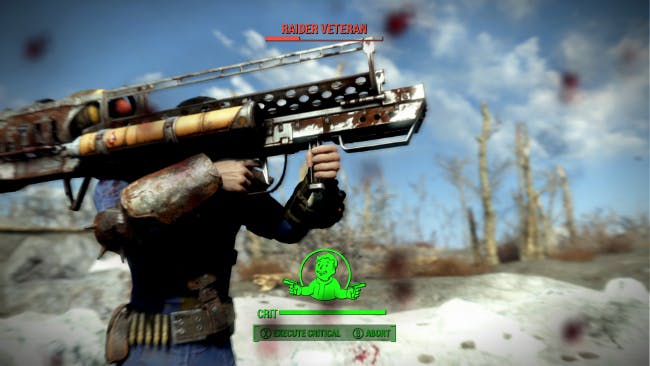 Having access to the Fat Man nuke launcher is the best and worst idea Bethesda had for the Fallout VR demo. Irresponsible use encouraged highly. (Image from Fallout 4.)

Conventional wisdom is that in order for a game to be good in VR it has to be designed from the ground up specifically for VR. I think Bethesda may be about to create some of the few exceptions to the rule.

After trying Fallout VR I’m no longer convinced that it’s going to be fresh, unique-to-VR games that drive adoption of the hardware. Fallout has a rabid fanbase. Bethesda games have a particular rabid following on PC, most obviously demonstrated by the thriving mod culture that Bethesda has finally hooked into the console versions of its games.

Anyone running Fallout or The Elder Scrolls on PC is likely to have invested in top-of-the-line hardware to run the games at max graphics quality settings. While $800 for an HTC Vive is still extremely expensive, PC gamers are also not alien to the idea of dropping $500 on a new graphics card every year or two.

Fallout VR will be challenging for Bethesda to get right. I can’t see how navigating through the Pip-Boy in VR could ever be as effective as using a control pad, or mouse and keyboard. Inventory management feels like it would be a massive pain in the ass.

I wasn’t able to loot the dead raiders, and have no idea as to what that would even look like in VR. I don’t know how using the V.A.T.S. targeting system would work in VR.

I imagine that Bethesda will not be able to release the same version of Fallout 4 that exists on PC and consoles, as a VR version. It will have to be a modified version specifically for VR.

But given the opportunity to walk the entirety of the Commonwealth in Fallout 4 in VR just for the hell of it, I’d be more than happy to give up fighting and looting as long as it didn’t get me killed.

When Fallout VR is released for the 2017 holiday season, I’m going to put serious thought into getting rid of the couch in my living room, to get the most room possible for my Vive play space.

I haven’t played anything else yet on the Vive that made me even entertain the notion of ditching my couch for a few extra feet of room. And I hope that tells you something about just how compelling I found the experience of playing Fallout in VR.