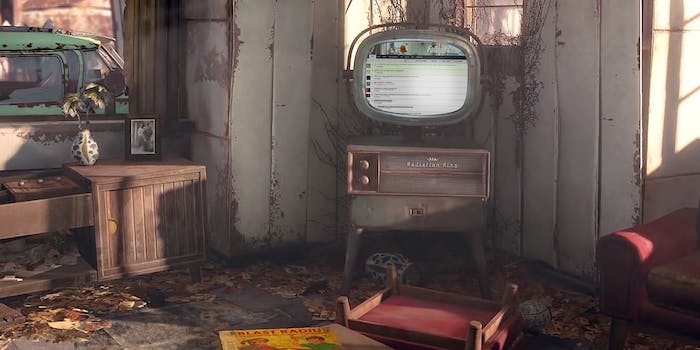 Redditors pick up on a massive cache of spoilers.

If you want to walk into Fallout 4 spoiler free, you should be careful in your Internet surfing the next few days.

A number of sources have been leaking footage from the highly anticipated next installment of the Fallout franchise, which due out Nov. 10. Some of the footage and alleged details about the game have been aggregated onto Reddit, where gamers are already dissecting it.

The two likeliest explanations for the leak are either someone got their hands on a stolen pre-release copy of the game, or someone broke a confidentiality agreement. Either way, there are now Fallout 4 spoilers circulating en masse online.

If you decide to take a peek, be warned that the potential spoilers do not only concern the story—an obvious concern whenever details of a role-playing-game leak early. They also involve purported details of some of Fallout 4’s basic game systems.

It was probably inevitable that this was going to happen considering the fevered pitch of hype surrounding Fallout 4’s announcement. The game has its own brands of soda and beer brewed specifically for promotional purposes. Loot Crate went through two runs of Fallout 4-themed boxes.

If you still intend to wait to actually get the game in your hands to discover what Fallout 4 is all about, stay strong. You only have about a week to go. Fallout 4 will be released for PC, PlayStation 4, and Xbox One.