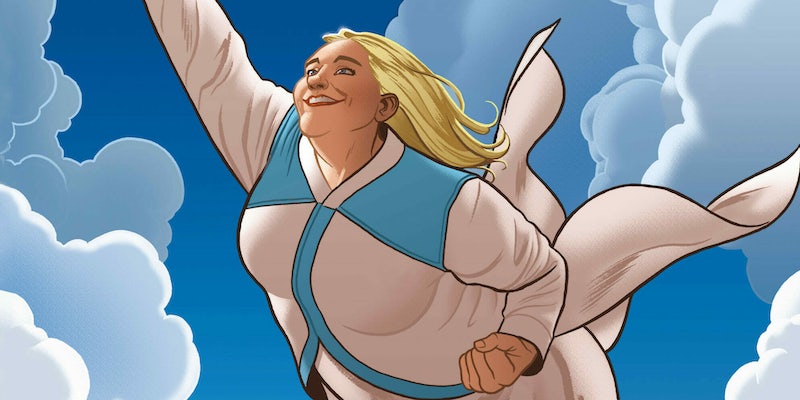 Plus-size superhero Faith is getting her own movie

This is a first for Hollywood.

Introduced in 1992 by Valiant Entertainment, Faith Herbert still feels revolutionary. Plus-size women are virtually nonexistent in the superhero genre, where female superheroes usually conform to model-thin sizes. In recent years Faith went from being a member of the Harbinger superhero team to headlining her own comic, and she’s now one of Valiant’s best-known characters.

Faith is characterized as a cheerful and optimistic hero with a relatably nerdy personality, working a classic secret identity day job as a journalist. Her powers include flight and the ability to lift people and objects within a forcefield.

Deadline reports that American Gods writer Maria Melnik has been hired to write the script. There’s no director as of yet, and we’ll have to wait a while for casting news.

The Faith movie is part of a wider slate of adaptations from Valiant Entertainment, which has been publishing indie superhero comics since the 1990s. (Reading between the lines, Sony wanted to make more superhero movies, outside the rather restrictive bounds of its Spider-Man franchise deal with Marvel.) The first Valiant movie will be the action thriller Bloodshot, starring Vin Diesel as the supersoldier hero and Fantastic Four‘s Toby Kebbel as the villain Ax. So, not the most innovative of comic book concepts. Faith seems like a better chance to branch out into unique material, given the limited number of female-led superhero movies in Hollywood.