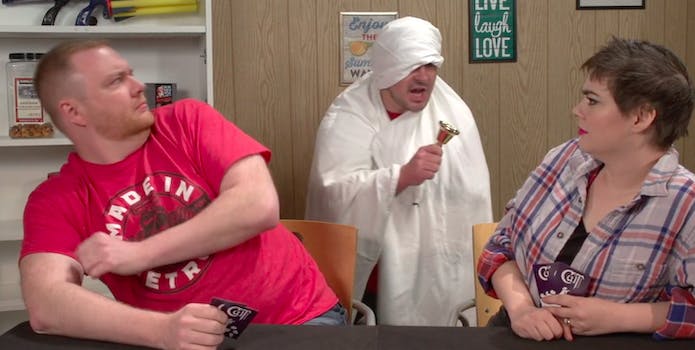 Make your next board game night less of a bored game night with this unique expansion deck.

Admit it: You’re super bored of Cards Against Humanity.

The game can go on indefinitely, and with a certain group of friends, you already know exactly how to play to ensure you cater to the judge’s sense of humor. Plus, even with hundreds of cards in various expansion packs, it kinda feels like you’ve seen it all. Right?

That game night boredom is what inspired the team at Tainted Brain to make Face the Consequences. The 200-card box is a universal expansion pack that adds a level of fun for the losers at the table. Though players can implement the bonus cards in whatever way they choose—and we suggest you think about that carefully, lest it become a weird hazing ritual instead of a night of fun with family and friends—the idea is that there’s an extra layer of incentive at work. If you break a house rule or have the worst card on a given turn, you could be forced to do something embarrassing or silly before the next round.

Some of the example cards include holding your hand in the air until someone high fives you, loading your pockets with rocks, or wearing a paper unicorn horn and prancing around the room. There’s also a NSFW (not safe for wimps) edition that includes some options that are meant for adult friends but could absolutely get weird really quickly: holding hands with someone while they pee, trading an article of clothing with a plastic bag, etc. Call me a wimp.

The best part is that the idea works with dozens of games that traditionally just have a winner. And clearly folks are into the idea: Since the Tainted Brain Kickstarter campaign for Face the Consequences went live last month, it has racked up over $31,000 in pledges with three days to go. Not bad, considering the FTC deck will only set you back $20.

If you’re not afraid of things getting a little weird, messy, or awkward, you can make your next board game night less of a bored game night and check out the Kickstarter campaign here.