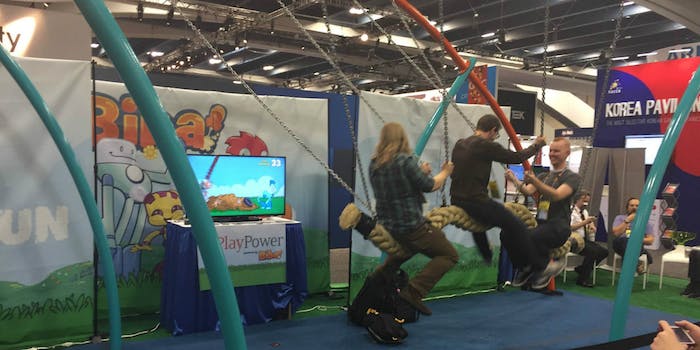 Video games could be coming to a playground near you

You (and your kids) can get in shape without unplugging.

It’s no secret that health professionals want kids moving around instead of spending hours in front of video games. The same goes for adults.

But some developers are finding ways to help gamers get physical activity without having to unplug.

Playground equipment connected to smartphones, upper-body workouts paired with virtual zombie slaying, and what felt like real-life Street Fighter gave us some exercise during the 2015 Game Developers Conference last week.

GDC is an opportunity for companies to show off new technologies that developers can weave into their games. One of the recurring topics at the conference is tech related to exergames—games explicitly meant to give players a good workout. We put three new games and hardware systems through their paces and found some novel approaches to exergame design. 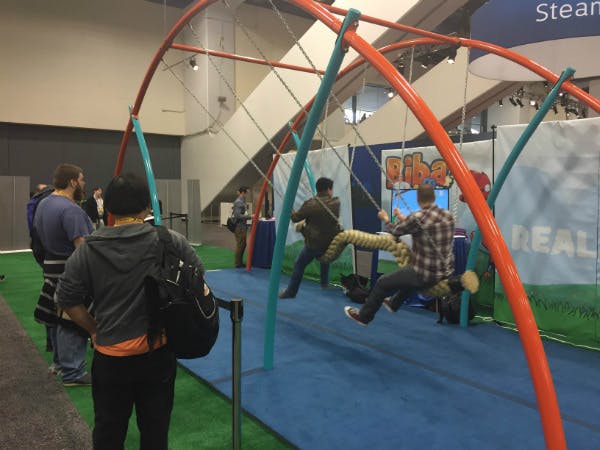 Playground equipment marked with QR codes that tie smartphones into exercise apps is the new initiative of Biba, a startup whose chairman is none other than Bioware co-founder Greg Zeschuk. Biba was spun out of the Zeroes to Heroes incubator based in Vancouver, and is partnered with playground equipment manufacturer PlayPower, a company based in North Carolina.

It’s all about pairing real-world activity with “screen time.” As long as a parent owns the Biba app, he or she will have access to the entire suite of games offered by QR code-integrated playgrounds.

At GDC, Biba demoed a giant swing set—up to three adults could sit on the swing—that’s tied to the app. In the related game, two robots need help building a rocket ship to get home. By playing on the swing, the players can help the robot dig into a pile of playground wreckage and shovel the parts into one a robot that uses the parts to build the rocket. As the swing goes in one direction, the parts get shoveled up, and as it returns in the other direction, the parts are tossed into the robot.

A smartphone running the Biba app displays a matching animation, drawn in kid-friendly graphics. The faster the swingset moves, the more dirt gets shoveled and the more points are scored by the players on the swing.

Biba also showed a promotional video for a game called Biba Racer. The child pretends she is a race car completing laps on a track. The parent presses a start button on the Biba app when the kid starts running and stops the timer when the kid comes in for a “pit stop.” The parent can use the smartphone to pretend to pour “fuel” into the “car.” Then the kid takes off running, again. 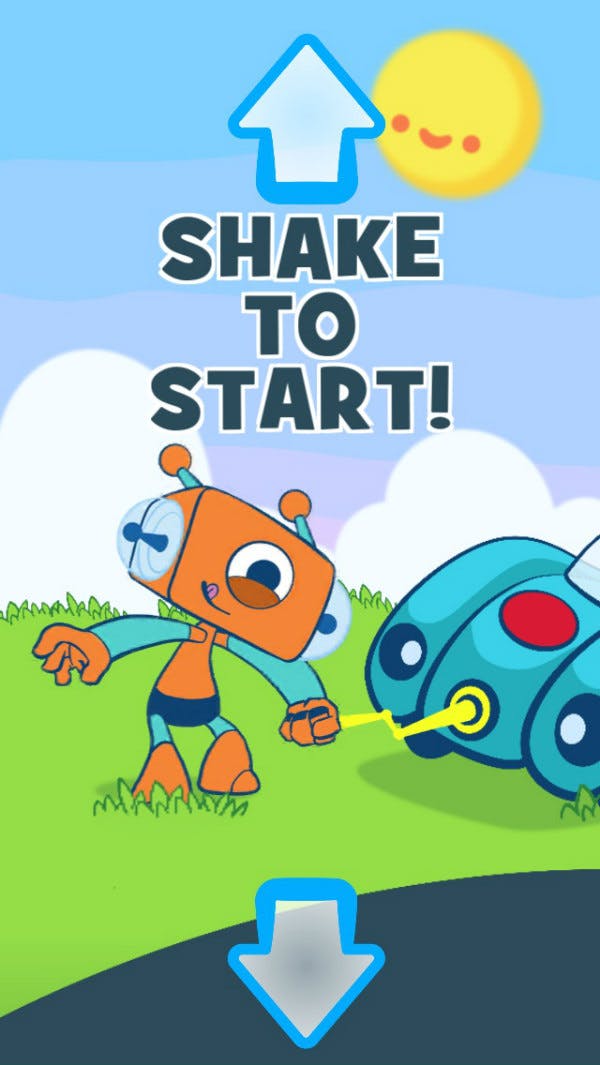 “We know from a University of Michigan study that the amount of time that children spend outdoors is about half what it was 20 years ago,” Lynne Vandeveer, chief marketing officer for PlayPower, told the Daily Dot.  “And children and parents both know that outdoor play is really beneficial and important to healthy child development.” 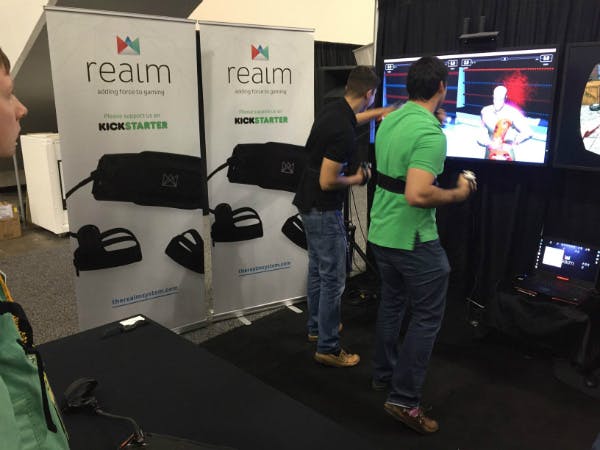 The Realm system was originally developed at the biodynamics lab at Teeside University in Middlesbrough, England. The system uses two handgrips with tension cords attached to a belt around the user’s waist. These grips measure the user’s three-dimensional force as the user pretends to swing swords in a video game about slashing zombies with a machete, for example. Or a video game about boxing.

Matthew Long, founder of the Realm system, licensed the technology from Teeside and launched a Kickstarter campaign to fund the project. Long is also the producer and director of the documentary film Running to America.

“Working with resistance at high intensity has a whole range of health benefits,” Long told the Daily Dot. The ability to measure three-dimensional force with the Realm system allows for measurement of how much energy was used to generate the force, which in turn calculates how many calories the user burned. The Realm system can also tell which muscles were used to generate that force.

The Kickstarter for Realm was canceled by Long shortly after the end of GDC 2015. He said in a post on the Kickstarter page that he found some “new opportunities” at GDC and would be updating people interesting in the project in the coming months.

The system might be useful in conjunction with virtual reality systems like SteamVR, which promote free movement within virtual reality spaces. Long told the Dot that the Realm system was easy to integrate into the Oculus Rift, for example. 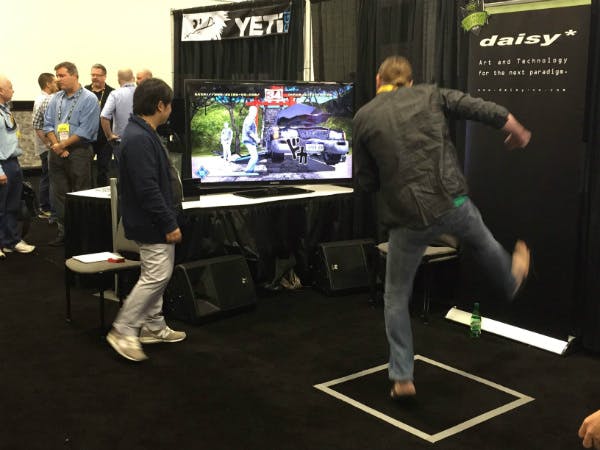 The final game exergame that impressed us at GDC wasn’t really designed for health benefits. It could, however, provide a workout that is much more fun.

Narikiri Showdown, developed by Japanese studio Daisy received an honorable mention in the 2015 GDC Play competition. The game uses a Kinect 2 camera to superimpose the player over a screen that looks like something out of Street Fighter. In the demo shown at GDC, the player then beats up a car. And they don’t just have punches and kicks at their disposal. They also have super powers. 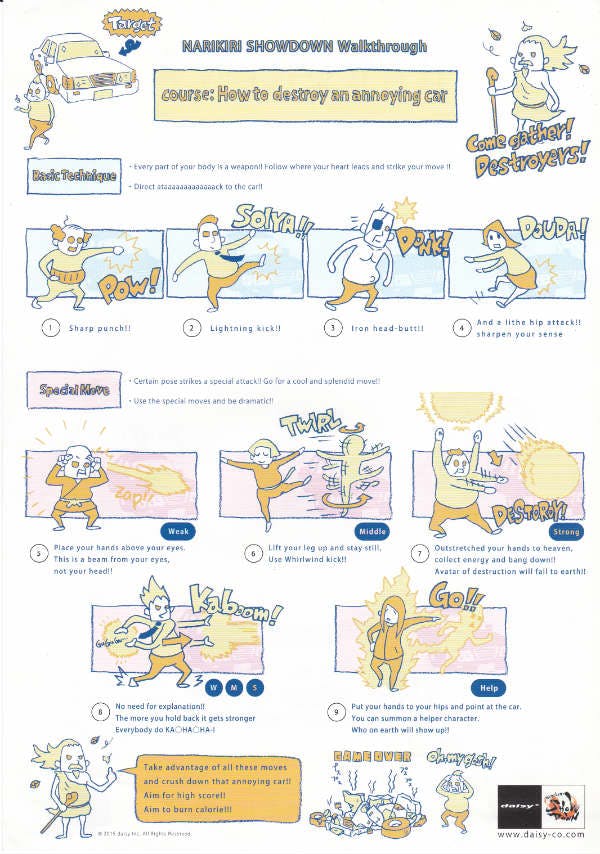 Narikiri Showdown is just a prototype, with no immediate plans for distribution, but it was still cool as hell, especially when we pulled off a Hadoken fireball. This promotional YouTube video for the game lets you watch Narikiri Showdown put through its paces.