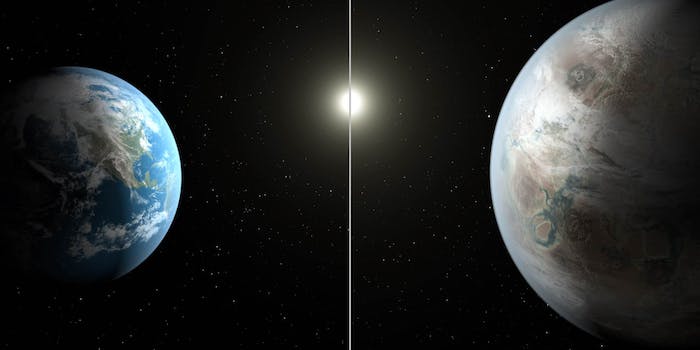 How long would it take the Starship Enterprise to reach Kepler-452b?

NASA announced Thursday that they’d found an older, bigger cousin to Earth about 1,400 light-years away. The planet and its solar system are so similar to Earth that NASA scientists dubbed it “Earth 2.0.” So what would it take to visit that planet? And how could Starfleet of Star Trek, equipped with ships capable of traveling faster than the speed of light, do it better?

First of all, some definitions for this thought experiment. The speed of light is 299,792,458 meters per second or roughly 671 million miles per hour. A light year is defined as the distance a particle of light can travel in one year. So 1,400 light-years equates to roughly 8.2 trillion miles. Pluto, by comparison, is just under 3 billion miles away from Earth—that’s around 0.03 percent of the distance between Earth and Kepler-452b—and it took a probe using Jupiter as a gravitational slingshot nearly 10 years to get there.

Of course, interstellar travel is totally NBD to Starfleet and their ship, the Enterprise. On the subreddit r/theydidthemath, redditors calculated how long it would take the Starship Enterprise to reach Kepler-452b from Earth. According to redditor alexander1701:

OK, getting to Kepler-452b is no problemo for the Enterprise (and many other sci-fi spaceships, as this infographic illustrates). But what about current humans?

“Quite the road trip”

Let’s say we wanted to send a probe, similar to New Horizons, to the planet. Currently, the probe is traveling at about 36,000 miles per hour. At that rate, it would take roughly 26 million years to reach its destination, according to Aaron Lee, a PhD candidate in theoretical astrophysics at the University of California, Berkeley.

“Modern humans have only been around for about 200,000 years, so that’s quite the road trip,” Lee said.

He also mentioned that the probe would have to withstand high levels of radiation and freezing temperatures as it drifted through the emptiness of space. More concerning, though, would be the probe’s weight.

To produce the breakneck velocities of New Horizons takes a lot of energy, and the further you’re going the more energy you’ll need to get there. Energy is provided by fuel, which, unfortunately for us, is not weightless.

But what about sending people there? In a hypothetical spacecraft that was able to travel as fast as New Horizons without killing its passengers, you would still have the time issue. Another r/theydidthemath thread calculated how many generations of people would live and die during the trip if a space shuttle could travel at 10 percent the speed of light. That would be 500 generations (generation defined by 25 years). But 500 generations is more than have lived since the dawn of human civilization, another redditor pointed out. That’s like living your entire life inside a machine and devoted to a mission conceived by cavemen.

Existential crises aside, humans would have a more pressing problem of the radiation mentioned earlier. People subjected to prolonged periods in space are known to suffer from a range of physical problems thought to be caused by the higher levels of radiation and the constant free fall of low gravity.

These problems include but are not limited to: muscular atrophy, loss in bone density, and permanent alteration to vision.

NASA is working out some of those problems right now as they gear up to send a manned mission to Mars sometime in the 2030s. But that trip is slated to take a mere four years from Earth to Mars.

What about a wormhole?

A wormhole is something of a shortcut through spacetime, Lee said. To use a trite but apt metaphor, imagine a piece of paper with two points on it—one representing Earth and the other Kepler-452b. If you were to travel between the points in a straight line, that would be like traveling through space normally. But if you fold the paper in half and punch a hole through the two points with a pencil, that would be like using a wormhole.

And while wormholes theoretically exist, “they are very unstable and tend to destroy themselves very quickly,” Lee said.

If you were lucky to even make it into one, entering a wormhole is a lot like entering a black hole. You would risk being ripped apart at a molecular level as you traveled through it.

Spool up the FTL?

So when you travel faster than light, you perceive the distance between you and your destination to be shorter; so you get there faster. That’s great, but unfortunately time and space around you doesn’t actually change. So while your journey of 1,400 light-years would appear to only take 100 years, 1,400 years still actually passed in the time people on Earth perceived. If you made a round trip, to you only 200 years had passed but everyone you knew on Earth would be long gone after the 2,800-year round trip.

Interestingly, Star Trek’s warp drive does account for this time dilation, according to this thread on r/asksciencefiction. Apparently, the Enterprise stays within a bubble of normal spacetime and warps the space around the ship, keeping the passengers in the same spacetime as everyone else.

But the warp drive was invented sometime in the 21st century, so we may be on our way to Kepler-452b pretty soon.