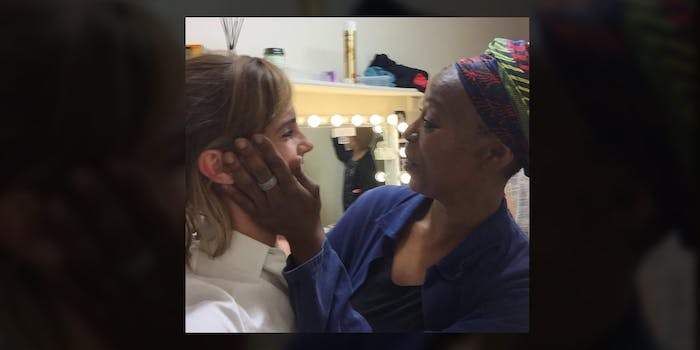 Hermione met Hermione after ‘Cursed Child,’ and it was incredible

'Noma was everything I could ever hope she would be.'

Harry Potter and the Cursed Child is still in previews, and while some of the actors from the Harry Potter film franchise want to wait before seeing it, one of its stars finally met her theatrical counterpart.

Yes, Hermione and Hermione are together at last—and it was awesome.

It was SO lovely to meet you @MissDumezweni. #Hermiones pic.twitter.com/xkh0PQyZEr

In a series of tweets, Dumezweni praised Watson and said that it “really was quite emotional to be in your company.”

1. Now I feel I can share the maHUSSIVE Joy I felt, alongside the company when a beautiful, humble and very kind young lady saw @HPPlayLDN.

2. @EmWatson It really was quite emotional to be in your company… And Thank you 4 your lovely self. We spoke of you with MAJOR respect ❤️!

Watson elaborated on the experience in a spoiler-free Facebook post. She met other members of the cast along with Dumezweni and had nothing but good things to say about the play. Some aspects, she noted were “possibly even more beautiful than the films.”

“Having seen it I felt more connected to Hermione and the stories than I have since Deathly Hallows came out, which was such a gift,” Watson wrote. “Meeting Noma and seeing her on stage was like meeting my older self and have her tell me everything was going to be alright, which as you can imagine was immensely comforting (and emotional)!”