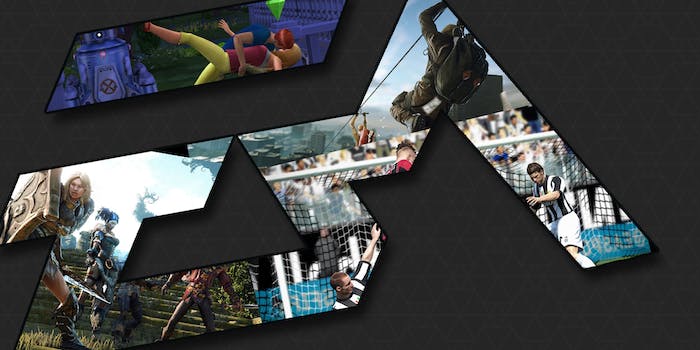 New Sims, Star Wars, Mass Effect, and FIFA games are on the way.

Electronic Arts came out of the gate with few surprises today at E3 2014 as the company shot right to the usual cavalcade of games we expect every year.

It opened its press conference with a video from DICE studios, which visited the LucasArts archives to study the iconic weapons and vehicles from the Star Wars films. It also visited the actual locations at which the films were shot, showcasing the icy plains of Hoth and the dense forest of Endor. All of this work is going into the new Star Wars: Battlefront, the popular class-based, vehicle-heavy, third-person, player-versus-player action game franchise.

DICE is a major player among EA’s slate of development studios. It showed off several games including Mirror’s Edge 2, which highlighted the development work being put into franchise hero Faith Connors. The developers talked about the use of color to suggest her strength and attitude. Parkour artists continue to provide guidance on how Faith tackles the environment. Her efficiency is being demonstrated through very tight, controlled hits. “We are creating Faith for a new generation,” said one of Mirror’s Edge 2 developers.

Then there’s Battlefield: Hardline, which is being developed by Visceral Games, the studio behind the Dead Space survival horror series. Hardline is essentially a partnership between Visceral and DICE, the stewards of the Battlefield franchise. The extended gameplay demo at the event was obviously meant to demonstrate Hardline’s Battlefield DNA.

Destructible environments, a construction crane collapsing and ripping into a building, and familiar UA elements like the blue and red diamond shaped waypoint markers, scoring text at the bottom of the screen, and the “last man in squad” notice all felt like any other recent game in the Battlefield franchise.

Players can decide for themselves whether cops and robbers maps smoothly onto the Battlefield formula through participating in a Battlefield: Hardline beta which opened today on PC and PlayStation 4. The press conference didn’t illustrate how PC access works, but PS4 players can find access to the Hardline beta through their Battlefield 4 menus. Hardline will be released on Oct. 21 and will run on 60 fps and in 1080p on the PlayStation 4.

BioWare also had a predictably heavy presence. In what I’m sure will be the reveal that drives the most fans the most crazy, BioWare teased a new Mass Effect game.

“We start by asking fans what they want,” said Casey Hudson, executive producer of the Mass Effect series in a promotional video.

Declaring that fans wanted something new, Hudson talked about sending Mass Effect players into a previously unseen part of the Mass Effect universe. He also spent a few minutes on the development of the characters, which takes advantage of the new generation of gaming hardware.

“We’ve never seen these characters this real before,” Hudson said. “How far can we go with these new games? Wait and see.”

Casey Hudson also teased that BioWare is working on a new IP, but provided no details whatsoever. There were slow, panning shots of forest environments running on the screen as Hudson talked about the new IP, however.

Sports always take up a sizeable portion of any E3 press conference from Electronic Arts. The new UFC game will feature Bruce Lee, and will be released on June 17. NHL 15 will feature the most detailed arenas that EA Canada has ever built, and the character models looked stunning.
PGA tour will utilize DICE’s Frostbite 3 game engine, which we can take to mean superior graphics and physics.

Improvements to the next game in the Madden franchise focus heavily on improvements for defensive play. There are new defensive cameras to allow players a better view of the offense. Players on defense can grapple with players on offense and push them in chosen directions, which could clog running lanes, for example.

The open field tackling system has also been revamped. Players on defense can choose conservative or aggressive open field tackles, get close for big hits, or dive into ball carriers’ legs to trip them up. EA has also added hundreds of new player emotion and reaction animations, to replace the current, canned animations. It worked with an award-winning cinematographer from NFL Films to create new presentation camera angles to cover the action during the game.

FIFA 15, the next entry in what may be the most popular sports franchise in the world, will feature new agility and control systems, including a new ball physics system that works off precise player contacts with the ball. Full body defending will allow for shirt pulling and shoulder charges. The crowds in famous football stadiums will reflect the character of their real-life counterparts, players can rip up the pitch with their cleats, and new physics will animated the flags around the field, and the goal frame when it gets hit with an errant shot.

We also got a preview of Sims 4, which will feature trait systems to improve the degree to which Sims players may customize their character’s looks and personalities. Players can also access other players’ Sims and bring them into their one game.