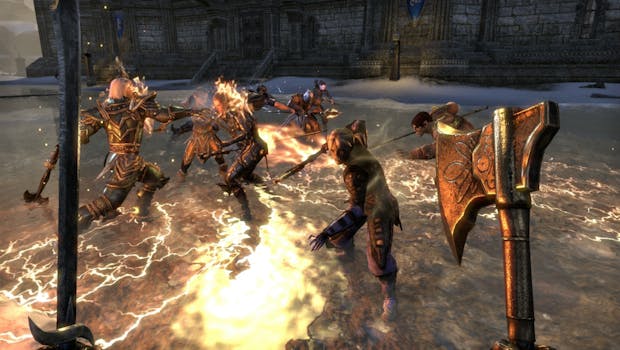 Another blow to the old school MMO profit model

Elder Scrolls Online players with paid subscriptions that would have extended past March 17 will be automatically enrolled into ESO Plus, a paid membership service that bestows exclusive bonuses and a monthly stipend of a new currency called “crowns” that The Elder Scrolls Online: Tamriel Unlimited players can spend in the Crown Store.

This new Crown Store will sell “convenience and customization items,” which in massively multiplayer online (MMO) games usually translates to “consumables and clothing.” Expect things like temporary stat boosts and ability potions, and costumes, for example.

The PC version of The Elder Scrolls Online launched on April 4 of last year. Bethesda Softworks announced a delay of the console versions on May 8, and again on Dec. 4.  The switch from a subscription model to a traditional pay-to-play model likely had everything to do with the impending console releases.

Today’s news about The Elder Scrolls Online is a punctuation mark in the ongoing discussion as to whether or not the subscription model is still viable for massively multiplayer online games. Ever since World of Warcraft all-but-officially established the user interfaces, game design, and moment-to-moment play mechanics of the modern MMO, new massively multiplayer online games like The Elder Scrolls Online have struggled to make money off the old subscription model.

BioWare’s MMO The Old Republic was released as a subscription-based game on Dec. 11, 2011, and switched to a free-to-play model in November 2012. Lovecraftian horror MMO The Secret World launched as a subscription-based game on July 3, 2012, and switched to a one-time “pay to play” model only five months later. Both games follow the basic formula of play mechanics laid down by World of Warcraft.

EVE Online, on the other hand, offers an MMO experience unlike anything in the traditional WoW template, and EVE Online continues to draw profits off the subscription model.