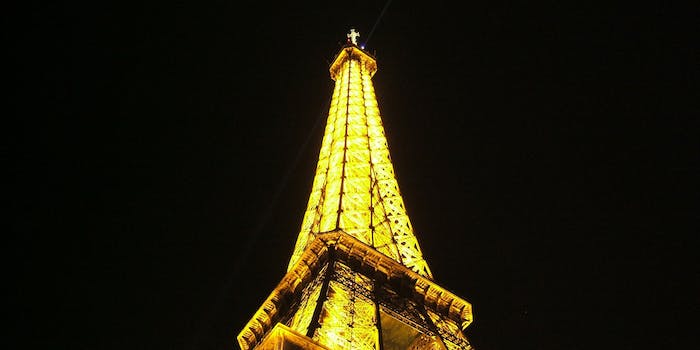 Even news organizations fell for it

At 1am on Saturday in Paris, a few hours after a series of deadly terrorist attacks, the Eiffel Tower went dark.

Wow. Lights off on the Eiffel Tower for the first time since 1889. pic.twitter.com/ZkeU5GmJfM

Thousands of people retweeted and liked this tweet. None of them apparently knew that the Eiffel Tower always shuts its lights off around 1am.

Rurik Bradbury, the man behind the Twitter account, said that he got the idea after seeing Fox News tweet about the darkened Paris landmark as a sign of mourning for the lost lives that night. But even the Fox News tweet was false. In a later correction, the news organization said that the video was from the night of the Charlie Hebdo attacks in January.

Correction: This video is from the Paris attacks in January 2015.

Why do hoaxes like these nearly always go viral? Even with multiple people replying to the false tweets with the correct information, many others still like, retweet, and post their own tweets based on false information.

Bradbury had his own thoughts, which he emailed to the Washington Post:

The social media reaction to a tragedy is a spaghetti mess of many strands, some OK but most of them useless. … But the part that feels the most useless to me is people’s vicarious participation in the event, which on the ground is a horrible tragedy, but in cyberspace is flattened to a meme like any other. Millions of people with no connection to Paris or the victims mindlessly throw in their two cents: performative signaling purely for their own selfish benefit, spreading information that is often false and which they have not vetted at all, simply for the sake of making noise. … Instead of silence or helpfulness, social media pukes out stupidity, virtue-signaling and vicarious “enjoyment” (in a psychoanalytic sense) of a terrible tragedy by people thousands of miles away, for whom the event is just a meme they will participate in for a couple of days, then let fade into their timeline.

Unfortunately, the science behind why people buy into and spread misinformation online is just as cynical.

According to research about the influence of social media on our news consumption, people are highly prone to simply believing whatever they read, without regard for the source of the information. When you have information that’s reasonably believable, like the Eiffel Tower going dark in the wake of a national tragedy (as opposed to, say, chemtrails), it just makes it that much more retweetable. Add to that that the Eiffel Tower, despite dimming at its regularly scheduled time, did stay dark until Nov. 16, and the whole thing seems pretty believable.

Of course, none of this justifies the fact that no one noticed the obvious joke in Bradbury’s tweet: That the lights had been on continuously since 1889. That’s just obviously impractical. But people simply don’t often fully read or comprehend what they’re sharing. Worse yet, once a false idea is out there and entrenched in someone’s mind, science suggests that it’s virtually impossible to dislodge.