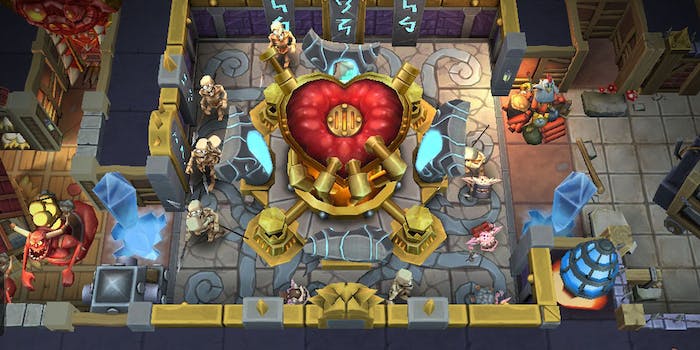 Does ‘Dungeon Keeper’ prove in-game micro-transactions are out of control?

To play EA's latest game, you pretty much have to spend real money in the game.

Earlier this week, Electronic Arts released a new iOS and Android app called Dungeon Keeper, a mobile homage to the company’s classic PC game. But the game was immediately trashed by fans and critics alike, who accused EA of sacrificing gameplay for on an over-reliance of in-game microtransactions.

Now Electronic Arts has responded to the criticism. And they’ve only made things worse.

When asked by TabTimes about EA Mythic’s handling of microtransactions in their remake of hit strategy game Dungeon Keeper, senior producer Jeff Skalski had this to say:

I think any time you re-make anything that is much beloved and has a great sense of nostalgia for people—be it a game, a movie, or whatever—people are going to be very protective of it. They have fond memories of it. We, as gamers, have our own fond memories of it. For a lot of gamers, the original Dungeon Keeper was one of their first experiences with great strategy games. Our intention with the mobile version was to give as many people as possible a taste of that original Dungeon Keeper experience, and for some people, that’s not the way they want to re-visit the franchise.

Much of the interview follows a similar tone. Skalski is quick to defend Dungeon Keeper’s microtransactions, pointing out it was not designed to be a “pay to play” or “pay to win” endeavour and is accessible to all “paying and non-paying” players.

In theory, Skalski’s words are completely valid. However, as per a review of the game from Eurogamer, the economy in Dungeon Keeper is “stacked in such a way that you’re forever being steered towards gems.”

To give an example of how crudely this system has been implemented, upgrading your Dungeon Heart – the core of your lair – to Level 3 requires only a few thousand rocks. Getting it to Level 4, the cost rockets to 50,000. The ripple effect of upgrades needed so that your dungeon can even hold that much rock is ludicrous. Scroll through the rooms and traps yet to be unlocked, and you’ll see the price of items heading north of seven figures.

Skalski’s responses are largely non-answers. For example, when prompted with inquiries if the criticism about Dungeon Keeper were fair, Skalski had this to say:

As for whether we think the microtransactions are fair? Well, most of the team, including myself, played as free players all throughout our 15 week soft launch. It was important for us to know that even a non-spender could enjoy our game and make progress.

Of course, this would be slightly more palatable if it weren’t for the fact that Dungeon Keeper disallows players from issuing anything but a 5-star rating.  According to Gamasutra, any attempt at giving Dungeon Keeper anything less than a sterling five stars will result in the player being told to send feedback to EA Mythic instead.