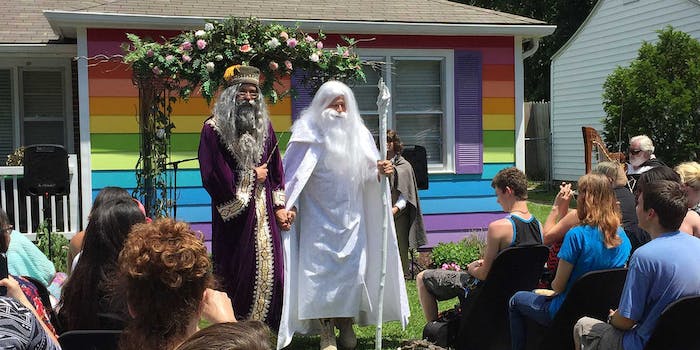 Photo via Digibard/FLICKR (CC BY 2.0)

The wizards got married in a lovely ceremony across the street from the worst homophobes in America.

In the best trolling of the Westboro Baptist Church the world has ever seen, a Kansas nonprofit staged the wedding of gay wizard icons Dumbledore and Gandalf last Sunday.

The idea for the wedding came from a Twitter spat between Harry Potter author JK Rowling and the gay-haters at Fred Phelps’s Westboro Baptist Church in late May. The tweets centered around Ireland making same-sex marriage legal, as well as a popular meme that suggested the wizards marry on the green isle.

When the Westboro Baptist Church promised to picket a potential wizard wedding, the Kansas nonprofit Planting Peace, which owns the house directly across the street from church headquarters in Topeka, sprung into action. The group’s rainbow-painted Equality House was the perfect locale for a magical gay union.

The ceremony took place on Sunday afternoon, with notably few protestors. It started off with a little harp music to set the tone.

The wizards were united by Davis Hammett, Planting Peace’s director of operations.

There were so many spectators in attendance, according to the Topeka Capital-Journal, that volunteers had to stand on the street and direct traffic. Seats were set up for about 50 people, but more than 240 showed up. As the same-sex senior couple locked lips, one woman let out an Amazonian warrior holler.

Although the Westboro Baptist Church headquarters were just a few feet away from the ceremony, church members were suspiciously absent from the ceremony, despite the threats of protest that prompted the wedding itself. Later, a WBC member responded by tweeting a kind of sad picture of a lone picket sign, propped up against what looks like the church’s porch.

.@BrookeKSNT of course we picketed #JKwedding! You don’t need a person for it to be a picket: pic.twitter.com/2QjKr4gmbb

This time, it seems, wizardly love won over hate. Or maybe it was the sheer force of fandom that saved the day. Either way: awwww.

incredibly honored to help with the #JKWedding to celebrate the magic of love pic.twitter.com/8hbVOTWKXS

Photo via Digibard/FLICKR (CC BY 2.0)