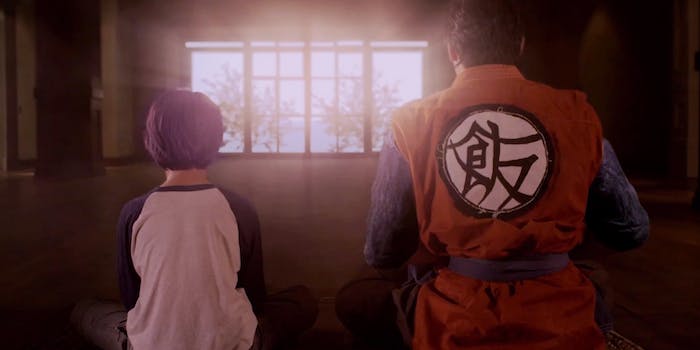 It's a pilot episode the creators hope will help crowdfund the rest of the series.

It’s a rare day when a live-action adaptation of a classic animated series actually does justice to the spectacle of the original. It only makes sense that often it’s the fans themselves who get it right.

Now, after a two-year long labor of love, one fan production company is bringing us a glimpse at how amazing a live-action Dragon Ball Z sequel could be.

Featuring an assist by Machinima and a sizable production crew, the 13-minute long episode is titled “Dragon Ball Z: Light of Hope.”  Production company Robot Underdog produced the episode as a potential pilot for a full webseries based on the DBZ film sequel Dragon Ball Z: The History of Trunks.

Also, Gohan’s hair is mesmerizing—as it should be—and the kid who plays Trunks is adorable.

Blogging about “Light of Hope”‘s release on the Robot Underdog website, writer Paris J. Lay wrote that the film was “a huge undertaking over two years in the making” that involved principal photography filmed on an actual mountain:

We had no idea how large, close-knit, and how truly passionate the fans of this timeless series were. Fans that were as close as here in Hollywood, CA and as far as Rio De Janeiro, Brazil.

The production company, which recently joined the Machinima YouTube network, is asking fans who enjoy the film to donate to help them achieve their goal of creating a complete webseries based around the concept. It seems a fair trade; after all, they’ve already given us Gohan and Trunks fighting evil androids on top of a mountain.

Perhaps after this, we can get them to tackle a live-action Airbender that can finally erase the Shyamalan version from our nightmares.