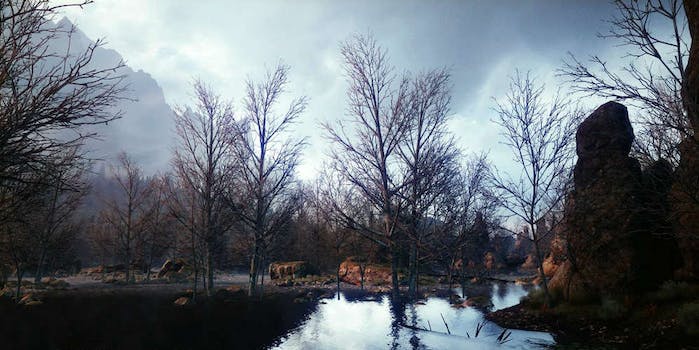 “You can go virtually anywhere that you can see in the landscape.”

BioWare is going to address one of the most common complaints about Dragon Age 2 and break from tradition while doing it. The developer is taking the open-world approach with Dragon Age: Inquisition.

“You can go virtually anywhere that you can see in the landscape,” Laidlaw said.

Dragon Age: Origins featured a large map in terms of potential locations to explore, but they were discrete areas with clearly defined borders. Players would load back into the map screen when they crossed the border. It was possible to encounter groups of enemies during transit between locations. This amounted only to being ripped out of the map screen and placed in a very small area for a combat encounter.

Dragon Age 2 was even more limited. Most of the action took place in the city of Kirkwall, and the encounter areas around the city were oft-recycled. This lack of diversity in places to travel may be critics’ most frequently cited problem with Dragon Age 2.

BioWare tends to take audience feedback seriously, so its move to an open-world environment with Dragon Age: Inquisition makes sense. The map is purportedly so large that BioWare had to introduce horses to help players to traverse it.

Dragon Age: Inquisition reflects the influence of open-world games like the Fallout and Elder Scrolls series. The Elder Scrolls V: Skyrim raised the bar on the size and detail worlds in role playing game can achieve. Now open worlds are beginning to feel like pre-requisites for RPGs.

The Witcher 2, which was structured along the lines of Dragon Age: Origins, is going open world with The Witcher 3. Nintendo is following the trend in the upcoming Legend of Zelda game for the Wii U announced at E3 this year.

Laidlaw also mentions a “World Master System” that leads to macro changes in the environment based on player actions. If the system in Dragon Age: Inquisition leads to meaningful changes in the game world based on what the player does, BioWare could lead, rather than follow, in this aspect of RPG development.

Dragon Age: Inquisition will be released for PC, PlayStation 3, PlayStation 4, Xbox 360, and Xbox One on Oct. 7.