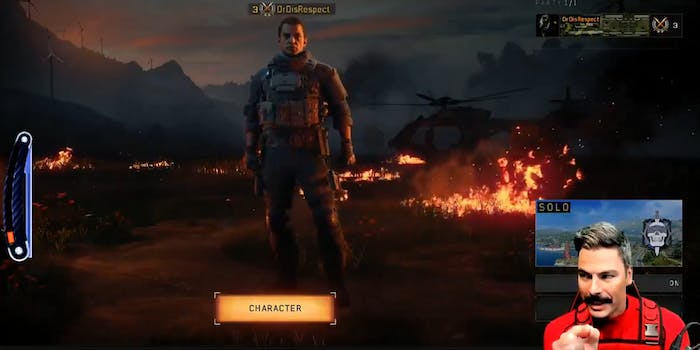 Fortunately, Doc and family are all confirmed safe at this time.

He got up in the middle of the game, still in full costume as the hilarious, over-the-top character he portrays on the streaming service, and disappeared for a few moments. Upon his return, he had doffed his signature sunglasses and wig, looking angry and perturbed. His demeanor was easily understood, however, when he revealed what had happened behind the scenes.

He had apparently just been the victim of a second house shooting that took place during today’s stream. While playing Call of Duty: Black Ops 4, someone had apparently driven by and shot through the upstairs window of his home.

The stream was taken offline shortly afterward, which left viewers puzzled and concerned about him and the family members who may have been involved in the disturbing incident.

Currently, there’s a message in place via Dr DisRespect’s Twitch page, advising that “Doc and Family Are Safe” and that “proper measures” are being taken while the stream is down, presumably for the rest of the day. According to Kotaku, a deputy from Beahm’s area had indeed been dispatched from the police department to investigate the crime.

In an unsettling turn of events, as Beahm noted during his explanation for his absence, the same thing happened yesterday. He has yet to release an official comment regarding the turn of events, and at this time there are currently few details surrounding the investigation.