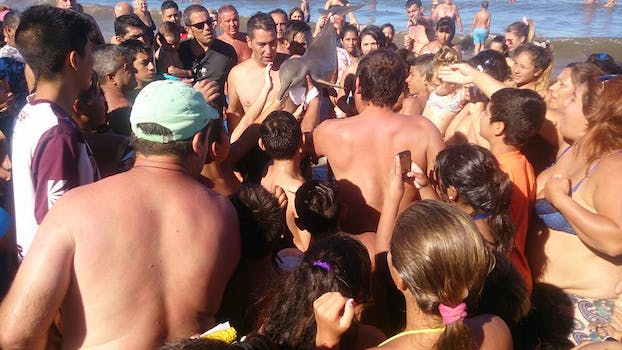 Rare dolphin dies after beachgoers pass it around for selfies

Why are people so terrible?

At least one of two rare La Plata dolphins died after beachgoers in Argentina took them ashore to snap some selfies.

The dolphin died from dehydration after people passed it around so they could take pictures with it.

La Plata dolphins are considered vulnerable, and their population is in decline, although exact numbers remain unclear. Although they are one of the world’s smallest species of dolphins, they can live to be 20 years old and are highly intelligent.

It should go without saying that animals should not be removed from their homes—especially in the water—for the sake of a cute picture or a closer look. Doing so can not only kill the animal but also, if it is rare enough, threaten its entire species.

Even approaching animals in their natural environment can cause them stress. Over time, if enough people unintentionally traumatize an animal, such encounters can lead to death by a thousand cuts.

Researchers who study wild marine animals carefully monitor the stress levels of animals they capture and release. Even those encounters can cause some stress.

If people in boats repeatedly approach an animal, it must expend considerable energy simply trying to escape, thus burning more calories than it normally would and requiring more food than normal. Higher-than-average food intake can be a problem because a roaming mammal in the open ocean is not guaranteed a large food supply. The National Oceanic and Atmospheric Administration recommends that people keep their distance and that they don’t pursue animals they encounter in the water or on the beach.

The agency also warns people not to feed, touch, or attract any animals. Everyone should be familiar with the basics of any wildlife they might encounter on a trip. Simply Googling the location one is planning to visit often yields basic safety information that can save the life of the traveler—and that of the possibly endangered animal.