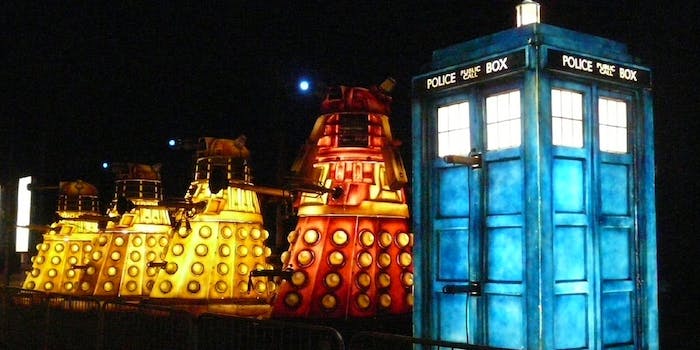 ‘Doctor Who’ is coming to a theater near you, Sony hack reveals

But which Doctor will be the one who comes to Hollywood?

Last year’s massive Sony hack continues to unearth juicy facts about our entertainment future. The latest reveal from the new searchable Wikileaks database of the leaked emails might be the biggest yet: The BBC and showrunner Steven Moffat plan to turn Doctor Who into a major Hollywood blockbuster before 2022.

The emails, exchanged in January of last year, allege that the planned film is part of an “8-year timeline” for the franchise that Steven Moffat and his creative team developed for the BBC last year.

The emails also allege that Moffat and crew were none too happy about the pressure that BBC Worldwide was placing on them to bump the film forward in the planned timeline.

The info comes as part of hacked emails between BBC Director of Television Danny Cohen, and Sony executives Michael Lynton, Andrea Wong, and Tom Rothman. The emails, exchanged in January of last year, discussed how to get in on the ground floor of talks for the film. After an apparent discussion took place between Wong and Cohen, Wong reported back to Lynton, stating that it wasn’t the right time yet for a discussion between Sony and the BBC about the film because of friction internally between BBC Worldwide and the Doctor Who showrunners:

Just spoke to Danny Cohen re Dr Who.   He said that while there has been tremendous interest (and pressure from BBC [Worldwide]) to do a Dr Who film, the show runners feel very clear that they don’t want to do one at this moment.  That said, over the course of the coming months, the show running team is coming up with an 8 year timeline for the brand  – laying out all that will happen with it.  He says that a film will certainly be a part of that timeline.  So the answer is that a film won’t happen in the next year to 18 months, but it is expected that it will happen after that within the 8 year horizon.   He expects the plan to be laid out by the end of the year…

A follow-up email from Wong made the internal tension at the BBC even more explicit:

Spoke to Danny and he doesn’t think [a discussion between Sony and Moffat] makes sense right now and actually might hurt our cause.  He said that the creative team on the show have been having the movie conversation with BBC Worldwide in recent weeks and are very hot under the collar that their position on it is not being listened to or accepted….

The Daily Dot has reached out to Cohen for comment.

If the email is true, it’s easy to see why Moffat and the Who creative team would be nervous about pushing the timeline for the film forward. The TARDIS is playing host to Peter Capaldi as one of the oldest time-traveling Doctors in franchise history. The inevitable pressure to cast someone younger for the film might interfere with the show’s narrative development. And then there’s the controversy over the all-white male lineup of Doctors so far, something Moffat will hopefully want to move away from before the Doctor becomes a Hollywood property. Plus, the more time passes, the less strident the cries of “Bring back Tennant!” become from die-hard fans of the Tenth Doctor.

From a creative standpoint, pushing the film forward might hamper Moffat’s efforts at dovetailing the show’s narrative with the film. From a personal one, the showrunner has already indicated in a recent interview that he expects the show to continue after he’s moved on from the franchise. Pushing the film back might allow him to go out with a bang, perhaps with a credit as screenwriter and possibly even director for the film itself.

Even so, 2022 isn’t that far off. That’s just about enough time for fans to debate and revel in the casting, director, plot, marketing decisions, trailers, and the endless tie-in products that accompany a major Hollywood blockbuster.

On second thought, that’s much too far away. Can we have this film yesterday?