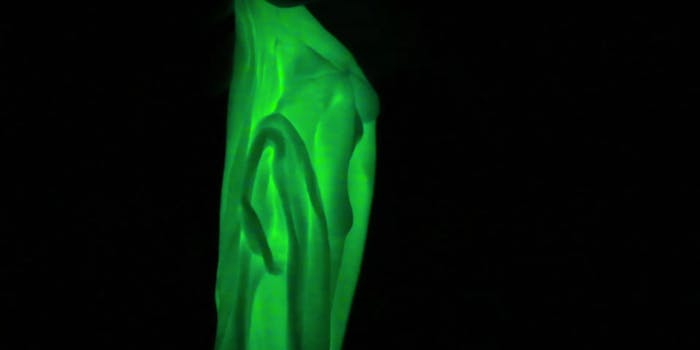 How to make your own glow-in-the-dark slime

PBS's 'Gross Science' tells you how to DIY glow-in-the-dark slime.

Some of us may have fond memories of making our own slime in science class growing up, but few probably remember the chemistry behind it.

Thankfully Anna Rothschild of PBS Digital Studio’s Gross Science is here to remind us why slime, and glow-in-the-dark compounds, are cool.

Basically, DIY slime is a mix of white school glue—the stuff you used to put all over your palms and then peel off with great satisfaction—and borax, a multi-use compound commonly found in detergents. Rothschild explains that mixing the two together allows charged molecules in the borax to interact with the long, repeating molecules in the glue called polymers to create a viscous liquid.

Rothschild goes onto explain how glow-in-the-dark paint works. She says that whenever light hits an object, it excites the atoms in that object, causing the electrons to jump to a higher state of energy and emit light in the form of a photon. That all takes place in the blink of an eye, Rothschild says, and the electrons drop back down to a more stable energy state.

But glow-in-the-dark paint has phosphors, which don’t drop back down to that low energy state quite so fast. Because of this property, they can glow for an extended amount of time after exposing them to light.

Check out the full video: