Rolling dice on a table? So PASSE.

If you really want to show the people you play tabletop games with that you mean business, you could impress them with a giant stack of games, custom-made dice shipped directly from England, or just don your robe and wizard hat.

Then again, you could also intensify every dice roll by sending them through an elaborate dice tower emblazoned with skulls, cogs, and orcs. It might make whatever you’re playing longer, but since when are tabletop gamers in a rush?

The towers are the focus of a Kickstarter from Moroz Publishing, run by two Russian gentlemen with illustrious histories in tabletop gaming. Maxim Istomin, who came up with the idea of the dice tower, previously created the trading card game Berserk:War of the Realms, while partner Sergei Machin founded Russian publishing company Rightgames LLC. Machin also created Evolution, an award-winning board game experience based on Charles Darwin’s theory of evolution.

The two aim to add a little extra fun to the tabletop experience with these dice towers, which come in three variants and range from $14-$35. Each come with a first player token.

Made of fiberboard and shipped unassembled, you also get the fun of putting them together yourself. The towers can also be painted if the owner sees fit. 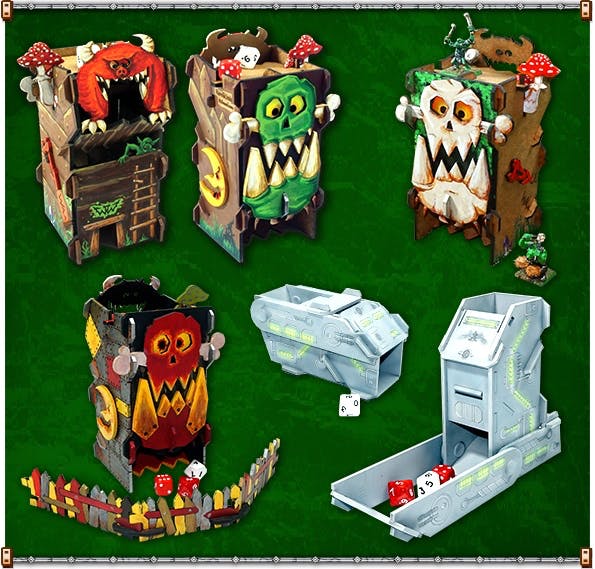 What’s way cool is that the project has been on Kickstarter for three days and it’s already a rousing success. Exceeding its modest $1,000 goal six times over (at the time of publication, $6,693 had been donated by 149 backers), it looks like Istomin and Davydov will need to start figuring out their stretch goals. Considering that their last Kickstarter netted them more than $32,000, we think they just might be good at this.

Maybe it seems a bit much to throw two dice in one of these elaborate constructs (unless you have a flair for the dramatic, and if so, work it!). But if you play games that require a handful of dice, these will keep them from flying all over the table. Plus, you’ll officially be the coolest person ever—even your dice will reign supreme over their own kingdom.