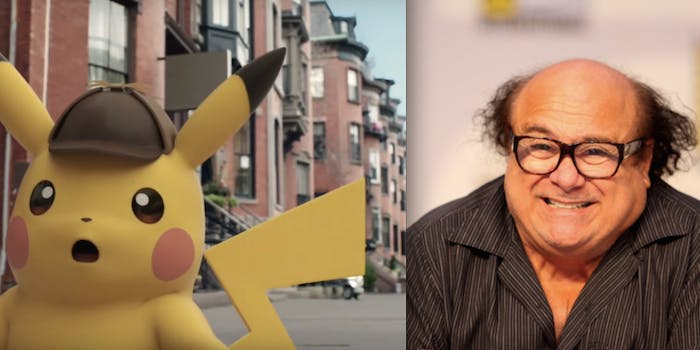 Nintendo recently announced their plans to release a video game called Detective Pikachu, in which gamers would play as the iconic Pokémon, donning a Sherlock Holmes hat and looking for clues to solve mysteries within the Pokémon universe.

It’s yet unknown if the game will be getting a release date in the United States, but that hasn’t stopped thousands of people from petitioning Nintendo to get Danny DeVito to voice the electrified creature for an English-language version of the game.

I don't usually sign online petitions, but this one deserves it. https://t.co/rYgY3k0qOV #DannyDeVitochu

The petition, spearheaded by a Sairith Aramor, has since received some 20,000 signatures. “There are a number of us that feel as though Danny DeVito would be a prime fit for the voice acting role of the Detective Pikachu,” Aramor stated. “We want to make this happen.”

Honestly, DeVito would be outstanding. Much like Pikachu, he’s adorable, funny, and something of a ticking time bomb (at least the character he portrays in It’s Always Sunny In Philadelphia is). Seriously, imagine the Pikachu we’ve come to know and love, able to speak like a human with a voice full of charm, wit and sardonic humor?

All we can hope is that this petition—along with the pretty clever hashtag #DannyDeVitochu—will make its way to Nintendo, so they can turn this fever dream into a reality.