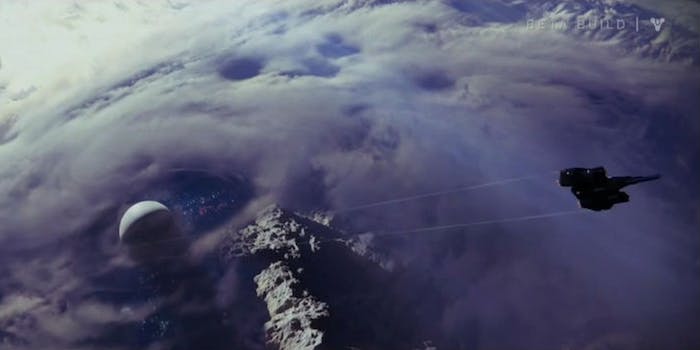 ‘Destiny’ is one of the most ambitious mashups we’ve seen

The hotly anticipated follow-up to Halo is turning out to be the platypus of gaming.

The 4.6 million people who played the beta test for Destiny were probably expecting a first-person shooter. That’s not what we got—but it’s hard to say what category Bungie’s highly anticipated follow-up to the Halo franchise would fall into.

That’s certainly not a complaint for most players, as evidenced by this NeoGAF thread where participants in the Destiny beta are already going through withdrawal.

It’s not a personal complaint, either. I love that easy genre labels are becoming useless. It means developers are mashing up different sets of ideas and creating ground for innovation that can be rare to find in triple-A game design.

I’ve been poring over the footage of the Destiny beta I captured on my Xbox One to cull out clips to show you what kind of game Destiny is. The more I rifled through my footage, the more excited I became for the Sept. 9 release date for Destiny. There are at least three different genres in here.

Destiny is a first-person shooter

Players will spend most of their time gunning down bad guys, and these portions of the game bear all the hallmarks of what I expect out of a first-person shooter from Bungie.

The weapons feel dead-on accurate. Melee combat is harrowing compared to other FPS games, because the melee attacks are so powerful. It felt to me like mid-range combat was the preferred engagement distance, which is also how I felt about Bungie’s Marathon and Halo franchises (versus Call of Duty, where I feel most at home in close-quarters fighting, and Battlefield, where I prefer longer ranges).

Dropships played a big role in my Destiny beta experience. Spacecraft for both the Fallen and the Hive, the two antagonist species we fought in the beta, warped into the air and disgorged troops, while I hid from the dropship guns that spelled instant death if they hit me. It was eerily similar to my experience hiding from Covenant Phantom dropships in Halo.

Destiny is a role playing game

Notice that all the enemies have health bars, level designations (that’s the number next to the health bar), and names floating above their heads. That’s straight out of RPGs. The Borderlands franchise, a blending of the FPS and RPG genres, does the same thing.

Levels are important in Destiny, which is another obvious reference to RPGs. If you’re a Level 4 character in Destiny, and the Fallen you’re staring at across the map at is Level 7, maybe you want to be careful. If you’re Level 6 and the Fallen is Level 2, however, just wade into the fray and don’t worry about it.

Even if there are only a handful of cinematics like this in the game, and even if there were no branching dialogue choices, it still feels like something out of Mass Effect, or Dragon Age, or The Old Republic.

Destiny is an MMO

This is the aspect of the game Bungie seems least comfortable talking about in interviews. Bungie developers have been evasive at best, and at times have outright stated that Destiny is not an MMO.

There has been one previous attempt to blend MMOs and FPS games together. Huxley would have offered FPS combat in small, arena-type matches, on large-scale battlefields, and in RPG-type player-versus-environment worlds where players could form parties and go on quests. Huxley also would have had a town, built to handle thousands of players simultaneously, where people could trade or socialize or form parties for questing.

Development on Huxley fizzled in 2010, however. The closest another game has come to an MMOFPS might be Planetside 2, which involves combined-arms, persistent-world, first-person shooter warfare with thousands of players, but it’s more like Battlefield on steroids than a traditional massively multiplayer online game.

Any reluctance on Bungie’s part to let the MMO label stick to Destiny could therefore also be because the audience really has no touchstone to understand what an MMOFPS might look like. Figuring out how Bungie was going to blend MMO and FPS games was certainly what I was most curious about when I walked into the beta.

In the Destiny beta, the main social hub was the Tower. It’s the last, safe city on Earth, where humanity is protected from the conglomerate of aliens who have all but wiped out the human race. And the Tower, or a space like it, could have been cut from a dozen different MMOs.

The Tower has a bank—called an armory in Destiny—and a mail system through a Postmaster robot. There’s a shipwright who services spacecraft and speeder bikes (read: mounts). The Tower even has what feels like class trainers, i.e. non-player characters who specialize in supporting individual player classes.

Players have socials like dancing, saluting, and pointing. Socials may be used anywhere, not just in social hubs like the Tower, but the existence of socials at all is another nod to MMO design.

Other than just seeing other players out in the world with me during missions or free exploration, what sealed the deal for me that the Destiny beta was an MMO was the Strike mission, which for all intents and purposes was a raid. Raids—instanced, end-game scenarios where multiple groups of players team up to take down a particularly bad baddie—are staple activities in MMOs.

In the Destiny beta, the Strike mission was called Devil’s Lair. The mission was to take out a giant Fallen machine called Sepiks Prime. Devil’s Lair was only designed for three players operating in a group called a Fire Team. It wasn’t a very long mission, but it had all the hallmarks of an MMO raid. It was instanced, it ended with a very tough Boss, and required more teamwork than anything else I tackled in the beta.

The Destiny beta also had a multiplayer portion called the Crucible, but I didn’t spend much time there. I generally know what to expect when it comes to multiplayer FPS games, and I was more interested in spending my limited time in the Destiny beta trying to get a handle on the entire package, and not one particular element of it.

Suffice it to say that the Crucible felt to me a lot like the multiplayer from Halo: Reach, i.e. extremely solid. The Crucible will probably be the long-term attraction to Destiny for a healthy percentage of the game’s players for years to come. What I think is more important for the long-term fate of Destiny, however, is whether or not the MMO label still feels accurate a few months after release.

In your traditional MMO, different cities can offer unique experiences, like access to a particular type of merchant. A plethora of different cities in an MMO also goes a long way toward making it feel like a world, that being a prerequisite for any successful role playing game, massively multiplayer or otherwise.

If it turns out that Destiny only has a single social hub at the Tower, it will immediately feel like an MMO-lite. That’s not intrinsically a bad thing, but without a robust, social environment, I fear that Destiny’s appeal to the non-multiplayer crowd could fade quickly.

Borderlands 2 was awesome, but it was also a very long game, such that after I’d beaten it once I didn’t feel inclined to start a new game with a different character to see what the experience was like with a different set of powers and abilities.

From my experience with the beta, it feels like I could find myself in the same situation in Destiny. There are three different character classes in Destiny: Titan, Hunter, and Warlock. I didn’t feel like I played the Destiny beta differently depending on which class I was, even when I played with groups.

Maybe that means I didn’t understand the classes. The maximum character level was also Level 8, which is at the low end of the scale. Maybe none of the three character classes had much room to mature into their roles in the beta.

With higher levels come additional powers, or more powerful refinements of existing powers, and access to better gear, all of which should help to differentiate the classes. If they don’t turn out to be distinct enough to each warrant a playthrough, however, someone who isn’t interested in the Crucible might not get more than a couple months out of Destiny, or however long it takes them to beat the story.

Expansions and downloadable content would bring those players back into the game for a time, of course, but it would be a shame if players aren’t given adequate motivation to get stuck in to Destiny for at least a year. The best MMOs inspire players to become personally invested in the game world over very long periods of time.

I think the universe Bungie is building with Destiny has the potential to be a place that ropes in players and keeps them there. Destiny features a beautiful if tragic world. The soundtrack alone was compelling enough that I left the game running even when I wasn’t actively playing, just so I could listen to the music.

I anxiously await my opportunity to see if Bungie can snare me in their universe. Destiny will be released on Sept. 9 for the PlayStation 3, PlayStation 4, Xbox 360, and Xbox One.