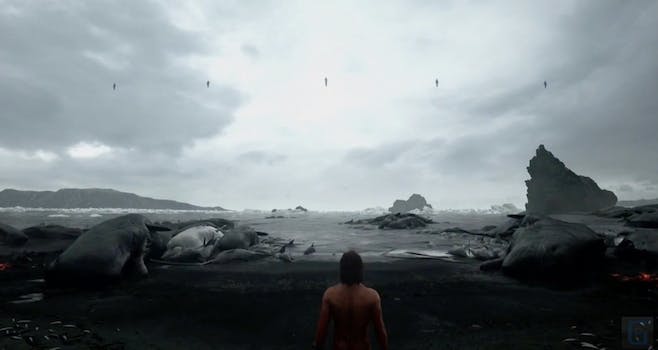 Silent Hills may be a no go, but Norman Reedus is back.

When Hideo Kojima takes the stage to announce a new game, it’s hard to resist his carefully pronounced English and secretive smile. While the audience waited with racing pulses, Kojima debuted the trailer for a brand new IP, starring none other than Norman Reedus.

Called Death Stranding, the game shows Reedus’ character waking up naked on a beach, surrounded by dead sea life. As he comes to, he discovers a baby lying in the sand before him, its umbilical cord still attached. He picks it up only to find it’s vanished from his hands, leaving behind a black oil stain on his palms. And in the broad skyline before him, five objects hover in the air along a horizontal line, unidentified but somehow still looming.

As usual, Kojima’s plan is far beyond our grasp, but the setup is so intriguing it will surely keep fans alert to see what’s next. There’s no projected release date for the game, but Sony says it’s in development now. Time to follow Kojima’s Twitter account very, very closely. Speaking of, it seems like fans are already tuned in.